This post is the next in a series on the monastic ruins of England. In the first installment I wrote about Furness Abbey in Cumbria; in the second I wrote about Thetford Priory in Norfolk. I launched this project with my post on English Historical Fiction Authors: "Listening to Blackfriars." And now I move the series to a treasure of Wales...

On the Welsh bank of the River Wye, Tintern Abbey, founded in 1131, soars to the sky nearly six hundreds years after the last monks departed. It survived the Edwardian Wars, the Bubonic plague, even the destruction of the monasteries--roofless, yes, and crumbling in many places, but far more intact than most other medieval abbeys. Tintern has proved a potent force of inspiration for writers, painters, and musicians, ranging from poet William Wordsworth to metal band Iron Maiden--not to mention Alan Ginsberg!


THE FOUNDING: Walter de Clare, lord of Chepstow and a relation of the Bishop of Winchester, founded Tintern Abbey. The De Clares were a vigorous, often violent Norman family that jostled for power from the time of William the Conqueror up to the early 14th century. When Walter, abbey founder, died childless, his nephew Gilbert De Clare assumed control of his lands, becoming the first Earl of Pembroke while earning the nickname Strongbow for his soldiering, mostly on behalf of King Stephen during the war over succession with his cousin, Queen Mathilda.

Tintern was the second Cistercian abbey to be established in England; its monks arrived from Blois in France. Over the next century, the high point in England's history of monasticism, Tintern's land holdings grew rapidly. Thanks to the patronage of Roger Bigod, earl of Norfolk, the monastery was blessed with a large, ornate church, following a cruciform plan. More than 200 feet long, it was built in red sandstone in the Gothic style.

THE ORDER: The Cistercians, also known as the White Monks, were formed with the goal of reform. They were very popular--by the year 1200 there were more than 500 Cistercian abbeys in Europe.

THE GLORY: The beauty of Tintern was a source of great pride to the surrounding countryside. Because its location was somewhat isolated, the abbey did not suffer any attacks during King Edward I's brutal conquest of Wales in 1282. Other monasteries thought to be sheltering Welsh leaders were damaged.

Tintern might have come under the protection of Gilbert de Clare, Earl of Hertford and Gloucester and commander of the king's forces for a time. Because of the family's connection to Tintern, it is possible the "Red Earl"--so named for his red hair and dangerous temper-- ordered the abbey left  alone. The Red Earl was a noble perpetually scheming and fighting and changing sides. He supported Simon de Montfort instead of Henry III, but betrayed him and later became young King Edward I's greatest champion, eventually marrying one of his daughters. Undoubtedly guilty of horrific murders, he often spoke of a desire to go on Crusade to the Holy Lands. In his 50s, he fought so bitterly with another nobleman over a land dispute, he was briefly imprisoned. De Clare was most definitely a creature of the medieval age.

After the battles in Wales were over, Tintern's renown grew. In 1326 Edward II, the son of the Red Earl's patron-turned-punisher, spent two nights there.

It was not a king or a nobleman but a disease that dealt Tintern its most serious blow. In 1348 or 1349 the Bubonic Plague reached Wales, killing one-third of the population. Wrote Welsh poet Jean Geuthin:


"We see death coming into our midst like black smoke, a plague which cuts off the young, a rootless phantom which has no mercy or fair countenance. Woe is me of the shilling in the arm-pit; it is seething, terrible, wherever it may come, a head that gives pain and causes a loud cry, a burden carried under the arms, a painful angry knob, a white lump. It is of the form of an apple, like the head of an onion, a small boil that spares no-one. Great is its seething, like a burning cinder, a grievous thing of an ashy colour. It is an ugly eruption that comes with unseemly haste. It is a grievous ornament that breaks out in a rash. The early ornaments of black death.’

Monasteries were hit the hardest of all, with their enclosed populations. Once the disease entered, it was likely to annihilate one and all. Tintern needed a great many monks to maintain it because of its size, and between the plague and a gradual decline in vocations, it was never the same thriving abbey after the year 1400.

THE DISSOLUTION: When Henry VIII broke with Rome and set loose the laws that dissolved the monasteries, some of the abbots and priors, monks and friars, resisted and incurred the wrath of the king. Tintern was not one of them. On Sept. 3, 1536, Abbot Wyche surrendered the abbey and all of its lands. If a monastery was in or near London, it was likely to be transformed into a home for a nobleman close to the king. But no one took Tintern as a home. All valuables were taken and the roofs were stripped for their lead. 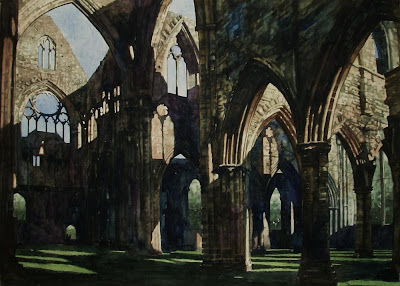 THE LEGACY: Few visited Tintern and no one much cared about its history until the Romantic movement, keen for picturesque ruins, discovered the abbey. Just about the time Turner painted the monastery, William Wordsworth in 1798 wrote the much-admired  "Lines Composed a Few Miles Above Tintern Abbey":

"...These beauteous forms,
Through a long absence, have not been to me
As is a landscape to a blind man's eye:
But oft, in lonely rooms, and 'mid the din
Of towns and cities, I have owed to them
In hours of weariness, sensations sweet,
Felt in the blood, and felt along the heart;
And passing even into my purer mind,
With tranquil restoration: -- feelings too
Of unremembered pleasure: such, perhaps,
As have no slight or trivial influence
On that best portion of a good man's life..."

Tintern Abbey became a popular destination, inspiring other poets, novelists, painters, and scholars. Parties especially liked to go at night to see the torchlight dance off the soaring walls.

The crown purchased the land from its owner, the duke of Somerset, in 1901 and the buildings were better maintained.

In 1967 Allen Ginsberg took an acid trip at Tintern and wrote a poem dedicated to "clouds passing through skeleton arches."

But of all the dedications to Tintern, perhaps the one least predictable by its medieval monks and lords was the band Iron Maiden, in its video for the song "Can I Play with Madness." It makes excellent use of the ruins site: http://www.youtube.com/watch?v=ocFxQjPeyiY

Nancy Bilyeau is writing a thriller trilogy set in 16th century England during the Dissolution of the Monasteries. The first novel, The Crown, published by Simon&Schuster in North America and Orion in the United Kingdom, was on the short list of the Crime Writers' Association's Ellis Peters Historical Dagger Award in 2012. The second novel, The Chalice, won Best Historical Mystery from the RT Reviews.