'The Tapestry' Goes On Sale as a Paperback Today!


I'm delighted to tell you that today, March 22nd, The Tapestry is available in paperback. The entire trilogy, The Crown, The Chalice and The Tapestry, is out in paperback, hardcover, ebook and audiobook.

Yes, I'm feeling emotional. This all began with the publication in 2012 of my debut, The Crown, which was fortunate enough to be an Oprah pick and earn reviews in Oprah, Parade, Entertainment Weekly, and Woman's Day. It's been a lot of work and, if you'll excuse the cliche, a roller-coaster ride: thrilling highs and teary lows. I'm very grateful to the team at Touchstone (S&S) and to the friends who supported me and the experts who helped me with fact checking.

Now it's the turn of The Tapestry! 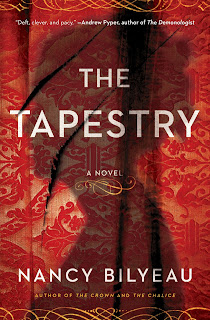 
April 1540: Henry VIII's Palace of Whitehall is the last place on earth Joanna Stafford wants to be. But a summons from the king cannot be refused! After her priory was destroyed, Joanna, a young Dominican novice, vowed to live a quiet life. That all changes when the king takes an interest in her tapestry talent. With a ruthless monarch tiring of his fourth wife and amoral noblemen driven by hidden agendas, Joanna becomes entangled in Tudor court politics. Her close friend, Catherine Howard, is rumored to be the king's mistress, and Joanna is determined to protect her from becoming the king's next wife—and victim. All the while, Joanna tries to stay ahead of a plot against her own life, directed by men in the shadows with power and access. Who can she trust—the constable who once saved her life or the friar she can’t forget? Wife or nun, subject or spy, Joanna must finally choose her fate. 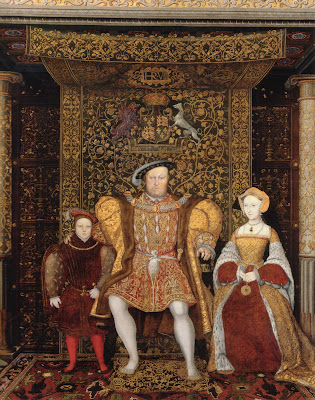 
“Nancy Bilyeau's passion for history infuses her books and transports us back to the dangerous world of Tudor England. Vivid characters and gripping plots are at the heart of this wonderful trilogy, and this third book will not fail to thrill readers. Warmly recommended!” (Bestselling author Alison Weir)


“Bilyeau’s rendering of the court and its diverse personalities and the very smells and sounds of the streets are intensely evoked. A lot of fun, and highly recommended.” (Historical Novel Society, Editor's Choice)

“Fans of the Tudor era, you’re in for a treat!” —InStyle magazine

"This final book in the Joanna Stafford series brings more mystery, danger and intrigue in Tudor England. Readers familiar with the story of Henry VIII and his many wives will recognize some of the events. However, Bilyeau gives us more. She provides historical detail of conditions in England and Europe and treats us to lesser-known possibilities and motives for the tragic events that unfold. Bilyeau creates a fascinating framework for this story of a popular historical period." —Romantic Times review

"This is a true historical thriller. It's a Tudor novel full of suspense, intrigue, brutality, and death, It's a well researched page turner. If you're looking for an exciting historical read, this will be on your list."—medievalists.net review

“A master of atmosphere, Nancy Bilyeau imbues her novel with the sense of dread and oppression lurking behind the royal glamour; in her descriptions and characterizations . . . Bilyeau breathes life into history.”(Laura Andersen, author of The Boleyn King)

"A rip-roaring Tudor adventure from Nancy Bilyeau! Novice nun turned tapestry weaver Joanna Stafford returns to the court of Henry VIII. She's that great rarity of historical fiction: a fiercely independent woman who is still firmly of her time. A mystery as richly woven as any of Joanna's tapestries." (Kate Quinn, author of Lady of the Eternal City)"The Tapestry takes its history seriously, but that doesn't stop it from being a supremely deft, clever and pacy entertainment. This is Nancy Bilyeau's most thrilling - and enlightening - novel in the Joanna Stafford series yet." (Andrew Pyper, International Thriller Writers Award winner of The Demonologist and The Damned)

The trilogy is on sale in the U.S., Canada, Great Britain, and Australia. The Crown and The Chalice are on sale in Germany, Spain, the Czech Republic, the Netherlands and Poland, with publication of The Tapestry coming soon in Germany.

Posted by Nancy Bilyeau at 8:08 AM