The Online Review That Made Me Cry

A new review from luxuryreading just hit my inbox and I'm in tears. In a good way. Reviews like this make all the working vacations and 5 a.m. writing sessions worth it:

"Bilyeau’s prose is beautifully constructed without feeling contrived; it is easy to fall into the story and stay there for hours. As the story relies heavily on centuries of history, her descriptions are woven into each chapter with a precision that can enlighten even those least familiar with the background while never faltering in her quest to entertain."


For the review in its entirety: http://luxuryreading.com/thecrown/
Posted by Nancy Bilyeau at 12:06 PM 1 comment:

Broke and Bookish--Love This Review

A new blogger weighs in and I am ecstatic to read this one: "If you like history, religion, and mystery, then this book is for you! 4 stars to a great debut novel."

I'm honored by this book blogger support.
Posted by Nancy Bilyeau at 6:19 AM No comments:

Happy To Be Devoured

I'm extremely grateful for the bloggers' response to my first novel. Each time I read a review I'm struck by the beautiful designs of these sites, the depth of the bloggers' knowledge of historical fiction, and most of all their passion for reading.

Each review and interview has helped me along the way. It was one of the first reviews, by Devourer of Books, that made me realize that I'd found my place online.

Here's what she wrote on Jan. 9, the day before my novel went on sale.

The Crown by Nancy Bilyeau
Published by Touchstone, an imprint of Simon & Schuster
Joanna Stafford’s family has been repeatedly touched by scandal. First her uncle is executed for treason, and now her beloved cousin Margaret is condemned to be burned at the stake for her part in an uprising against Henry VIII and his persecution of the old (Catholic) ways. Even absent her family connections, Joanna is a suspicious figure as a novice Dominican nun in a time when the King has broken with the Pope and is shutting down religious houses throughout the country. Between the family treason and the religious leanings, Joanna finds herself in great trouble when she becomes involved in a commotion during Margaret’s execution. Imprisoned in the tower, along with her beloved father, Joanna is offered a single way to save both herself and her father by Stephen Gardiner, Bishop of Winchester: she must return to her convent and find the crown worn by the Saxon King Athelstan. As soon as Joanna returns, however, people begin turning up dead, complicating her mission and making her wonder just what this relic really is.
The Crown  would best be classified as a historical thriller, but to my relief, Bilyeau’s writing style is much more closely aligned to the historical fiction genre than to the thriller genre, avoiding the short chapters with cliffhanger endings that are a hallmark of many thrillers. Bilyeau develops her characters well; Joanna is certainly a fully-fledged person and, although the reader does not have access into the minds of the other characters, all of the secondary characters are complex enough to be realistic as well. Even Gardiner manages to avoid being a two-dimensional villain. Each chapter has rich historical detail interwoven with the story, bringing a sense of authenticity, without ever devolving into info-dump territory.
The storyline Bilyeau created for The Crown is fascinating as well. Even while Joanna is in the tower the action continues to move forward and the reader begins to get a sense of the political intrigue occurring throughout the court and the religious orders. The legend of Athelstan and his crown is teased out perfectly, enough information is given to keep the reader from becoming frustrated, but enough is also withheld to keep the level of suspense high.
The Crown may be a debut novel, but it is a fantastic example of the historical thriller drama. If that’s what you’re in the mood for, I highly recommend picking up The Crown.
Here's the review on the website, plus the comments below: http://www.stumbleupon.com/su/2Nh4yH/www.devourerofbooks.com/2012/01/the-crown-by-nancy-bilyeau-book-review

All I can do is say, Thank you.
Posted by Nancy Bilyeau at 8:32 AM No comments:

Tune into My Radio Interview on Monday, March 5th

Literary New England, a wonderful show on blogtalkradio, interviews me on Monday, March 5th, at 8 pm. Other authors on the show: Taylor Polites on The Rebel Wife and Howard Frank Mosher on The Great Northern Express. And there will be fun chat about Dr. Seuss as well.

I'm on the show because I once lived in New England--Connecticut, to be exact--but anyone can listen by clicking on this link below. And there will be giveaways!

http://www.blogtalkradio.com/literarynewengland/2012/03/06/taylor-polites-howard-frank-mosher-nancy-bilyeau
Posted by Nancy Bilyeau at 10:29 AM No comments:

My third novel, The Tapestry, was published this year. One of the questions I'm always asked is ... why Tudor England? People want to know why a newspaper reporter turned magazine editor, born in Chicago and raised in Michigan, a wife and a mother of two children, would be drawn to another time and another country.

I can tell you that it began when I watched "The Six Wives of Henry VIII" on television with my parents when I was perhaps 11 years old. But why did I stay interested? And I'm not just interested--transfixed, really, with the 16th century for my entire life. There is no simple answer. Yes it's the drama of the royals, the fearsome Henry VIII, his jostling wives, his devious courtiers, and his courageous daughters. It's the vividness of the Holbein portraits and the beauty of the writers and poets, from Erasmus to Sir Thomas More to Sir Philip Sidney.

But I do believe it's a line from the greatest 16th century-born writer of them all, William Shakespeare, who captured what I love the most about the time of the Tudors: "This rough magic," says Prospero in "The Tempest." 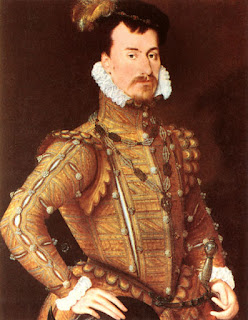 And it's this 1560 painting, of Robert Dudley, the earl of Leicester, that illustrates the rough magic. Dudley the man Elizabeth I loved, makes no appearance in my novels (yet!). "The Crown" takes place in the late 1530s, Dudley firmly belongs to the reign of Elizabeth. But when I look at this portrait, I think about how he embodies so well the fascinating contrasts of the 16th century.

A Venetian ambassador said of Dudley: "A man of tall personage, a manly countenance, somewhat brown of visage, strongly featured, and thereto comely proportioned in all lineaments of body."  Dudley was well educated and cultured--and a hell of a dancer. But he was also mistrusted, loathed and even feared. When his first wife, Amy Robsart, ended up dead at the bottom of a very shallow staircase, he was widely suspected of having killed her to "make room" for the queen. In this portrait, completed the same year that his wife mysteriously died, you can soak in his confident, almost swaggering pose. Note his well trimmed mustache and his lavish doublet. He's a man of potent, if not deadly, charisma. He financed private companies of actors and musicians; he collected art; he invested in exploration and London businesses and gave to the poor. Yet he was also considered greedy, violent, utterly ruthless, and quite contemptible by rival courtiers. Robert Dudley was, I think, all these things. He was the embodiment of the 16th century man.

Prospero's complete line is: "This rough magic I here abjure." But I could not say goodbye to the 16th century even if I never wrote another novel set in this time. The spell of this rough magic lasts for life.
Posted by Nancy Bilyeau at 12:24 PM No comments: