With Prince Harry and Meghan Markle taking the titles of Duke and Duchess of Sussex, it made me think of a person who bore the title of Sussex and played a crucial part in the life of Elizabeth I.

His name was Thomas Radclyffe, and he was the third Earl of Sussex.

Throughout her whole life, Elizabeth turned to and trusted the relatives on the side of her mother, Anne Boleyn. Thomas Radclyffe was part of the Howard clan. Anne Boleyn's mother. Elizabeth Howard, was his aunt.

Although Sussex signed the document agreeing to the accession of Lady Jane Grey, which was what Edward VI wanted, he was one of the courtiers who broke away early on and rode to the camp of Princess Mary, Henry VIII's oldest daughter, to offer her support in taking the throne. Mary made him her commander-in-chief during the time when it looked as if she would have to wage a battle. Sussex had Catholic sympathies and Mary's efforts to return the country to the Old Religion must have appealed.

Sussex, at that point 28 years old, became an important councilor to Mary after she'd officially ousted Jane Grey. But it was after the Wyatt Rebellion, when those who opposed Mary's marriage to the Catholic Prince Philip, that Sussex's loyalty to his cousin Elizabeth became clear as well. Elizabeth was arrested under suspicion of conspiring against Mary, and a deputation of lords that included Sussex came to take Princess Elizabeth to the Tower of London on Saturday, March 17.

Elizabeth protested being taken to the Tower, asking to see the Queen, her half-sister. She was told no. She then asked to write a letter to the Queen and that too was refused. Elizabeth was by all accounts very upset.

But it was at that point Sussex came forward.

Sussex fell to his knees before Elizabeth and said, "You shall have liberty to write your mind and, as I am a true man, I will deliver your letter to the Queen and beg an answer, whatsoever comes there of."

Elizabeth wrote a pleading, eloquent letter, protesting her innocence, which Sussex then took to Queen Mary. She was enraged that Elizabeth was allowed to write to her and said, "Such a thing would never have been allowed in my father's time!"

Elizabeth survived her ordeal in the Tower, when she came closest to execution than any other time in her life, and it was in part due to the intervention of Sussex. There was no hard evidence against Elizabeth, and a leading nobleman in the realm being willing to risk the Queen's wrath to support her sister may well have slowed down the movement to proceed against Elizabeth.

Sussex continued to support her throughout Mary's reign, and when Elizabeth I became Queen in 1558, he was one of her most important courtiers. Sussex always distrusted Robert Dudley, earl of Leicester, but even though he vigorously opposed her marrying Dudley and criticized him at every turn, Elizabeth never punished him for it.

In her letters to him, Elizabeth addressed Sussex in a 1570 letter as her "right trustie and right well beloved cousin," and he was a key councilor for the rest of his life.

Sussex is without a doubt an admirable title.

Email ThisBlogThis!Share to TwitterShare to FacebookShare to Pinterest
Labels: Earl of Sussex, Elizabeth I, The Tudors

The Crown in the Czech Republic

I'm excited to report that my first novel, The Crown, sold well in the Czech Republic. Its publisher was Euromedia Group--I still have the facebook post from a few years ago on how excited I was to get them as my twelfth foreign publisher for the book, when the deal was first made.

Its title is Koruna. And my name becomes Nancy Bilyeauova :)

I think part of the reason the book is doing well is its dramatic cover: 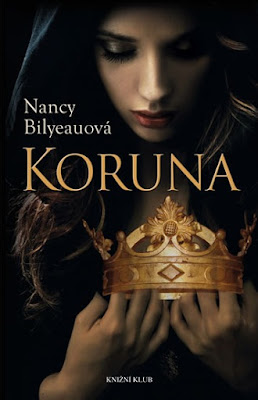 What do you think?

Posted by Nancy Bilyeau at 1:07 PM No comments:

Cover Reveal Day for "The Blue"!

Today is the day to share with everyone the cover of "The Blue," my historical thriller set in the 18th century that asks the question: What would you do for the most beautiful color in the world?

The cover was created by designers at Endeavour Quill, my UK-based publisher for the novel. I think they did a great job! 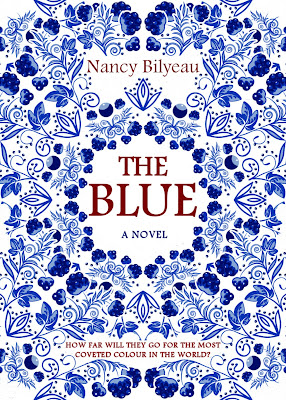 I can also share the very first endorsement blurb: ‘Bilyeau’s sumptuous tale of mystery and intrigue transports the reader into the heart of the 18th century porcelain trade—where the price of beauty was death.’ E.M. Powell, author of the Stanton & Barling medieval mystery series.

In this book, I plunge into the luxury-obsessed Georgian society of the 1750s, when someone would go bankrupt collecting porcelain. But it was also the time of a war with France, and spying between the two countries was flourishing. In "The Blue," these two worlds intersect, with a heroine, Genevieve Planche, drawn from the Huguenot Spitalfields neighborhood.

This book is a big departure for me, based on years of research, and I worked to develop some multi-faceted characters.

I need your support :) Please go to my brand new Goodreads page, and mark the novel "Want to Read." I'd be extremely grateful :)

The book will be published this Fall, in print and on digital in the UK and US. Details to follow...

Posted by Nancy Bilyeau at 1:53 PM No comments:

Walter Mosley's "Unto the Sea"


This review ran in the June issue of The Strand. 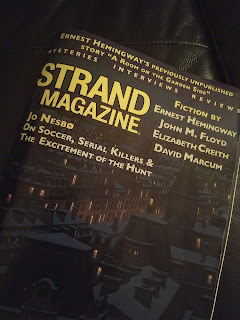 Down the River Unto the Sea


A man seeking justice after he's been wrongly accused and imprisoned is a time-honored story line, with revenge savored deeply in classics such as The Count of Monte Cristo (1844) and other novels. In Walter Mosley's new stand-alone, Down the River Unto the Sea, the damage done to the protagonist, Detective First Class Joe King Oliver, is nearly as horrifying as what happens to Edmond Dantès at Château d'If.

King is a shrewd and resourceful investigator with the NYPD, but he isn't perfect--and someone knows it all too well. Playing on his weakness for women, a trap is set, and after a fling with a "modern day Tallulah Bankhead, with the husky voice, quick wit, and that certain something," the married King is arrested for assault. In his first thirty-nine hours in the Rikers Island Jail, King is attacked by four convicts, but that's just a warm-up for what the guards have in store for him.

The charges are dropped, but King's marriage and career are over. He's a broken man who needs years to rebuild himself back up to the point where he's strong enough to become a private investigator, with his loyal teenage daughter running the front office. To King's shock, a letter arrives in the mail one day from "Tallulah," now a born-again Christian living in Minnesota. She admits, "I was forced to entrap you," and asks for forgiveness. At about the same time, King gets a new case to investigate: a radical black journalist accused of killing two corrupt off-duty cops. As these two threads intertwine, King finds himself threatened and hunted by those willing to kill to keep their secrets hidden. No matter the danger, though, he's driven forward.

Hidden enemies emerge from King's past, but so do allies, none more memorable than Melquarth Frost, "the most dangerous criminal I had ever come across," a man who is determined to help King in his hour of need. In Mosley's skilled hands, Frost is a ruthless murderer, yes, but the harrowing pain that formed his pathology is made plain, and Frost's every moment in the novel is vivid. Throughout the book, those who have been abused and broken are described with clear-eyed compassion. Theirs is a gritty and sad world, but Mosley's poetic descriptions of New York City and his character's deepest souls elevate the story to beauty. Although the characters, major and minor, are all compelling, in the end it is King's story to tell, as he struggles to decide how much he's willing to risk to get the truth. As Mosley writes, "A man can live his whole life following the rules set down by happenstance and the cash-coated bait of security-cosseted morality; an entire lifetime, and in the end he wouldn't have done one thing to be proud of." --Nancy Bilyeau

Posted by Nancy Bilyeau at 9:20 PM No comments: