"The Beach Scene": Women of Coney Island in Art

Some authors use music, others gather photographs, and still others turn to paintings for inspiration for their novels. I soak up ideas and images from all of the above. When it came to my latest novel Dreamland, I studied not only the turn-of-the-century photographs of Coney Island and Manhattan but also some intriguing--and somewhat disturbing--paintings and illustrations.


In Dreamland I write about the two worlds in Coney Island, the raucous one of roller coasters, hotels in the shape of an elephant, circuses, and other attractions ... and then there's the second one: the privileged elite who gathered at such luxury hotels as Manhattan Beach, Brighton Beach, and the Oriental. These guests rarely strayed to the amusement parks less than a mile away; the hotels' perimeters were patrolled by Pinkerton guards.

A painting by Samuel Carr captured the upper class that was drawn to Coney Island. "Beach Scene" is one of his best-known artworks. The Manhattan Beach Hotel, frequented by not just bankers and landowners but presidents, inventors, and European aristocracy, opened in 1877. The people in the painting, circa 1879, could have been based on that hotel's guests.

While researching my novel at the Brooklyn Historical Society, I read about this artist. Carr, originally from England and trained at the Royal School of Design, settled in Brooklyn in 1863 and focused on scenes of the borough, on the beach or at the park. His paintings were sold alongside those of Rockwell and Wyeth.

What first strikes you when looking at the painting "Beach Scene" is how, on a summer day, everyone is completely covered by clothing, the women wearing long sleeves and skirts that reach the sand. This is not at all shocking--this was still the time of Victorian behavior on both sides of the Atlantic--but it looks uncomfortable to our modern eyes.

Everyone is grouped in the painting, pursuing wholesome activities: children digging in the sand, a multi-generational group posing for a photograph, others taking a ride on a donkey, or watching a Punch and Judy Show.

But there's one person who is not part of a group and she is the one I was drawn to and who inspired me in my writing. Just to the left of the center of the painting stands a woman alone, wearing a light brown dress, looking out to the water, turned away from the artist. She's young, slender, very well dressed, seemingly with everything in her favor in the year 1879, yet there's an aura of apartness to her. I drew on that aura when creating my main character, heiress Peggy Batternberg.

Carr executed quite a few other paintings, and I enjoyed studying them. But I wondered about his life--he never married but lived with his sister and her husband and was a dedicated Mason--and why he was so drawn to happy families at the ocean. 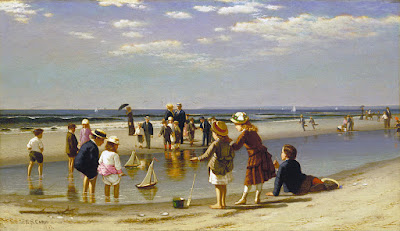 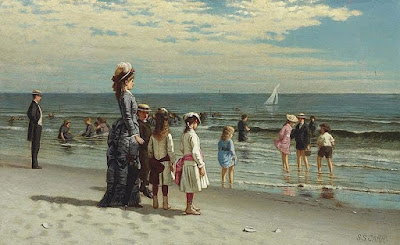 These wealthy wives and daughters of the East Coast were not the only females on the beach at Coney Island.

As the amusement parks boomed in popularity beginning in the 1880s, working-class women came to Coney Island by the thousands. Some were accompanied by boyfriends, husbands, or fathers, but others were exuberantly single and independent, arriving with other women and taking full advantage of the free-spirited vibe of "America's Playground."

This is one of my favorite photos, taken in 1899, not too long after Samuel Carr set up his easel down the beach:

But as much as I'd like to celebrate their freedom, there is another layer to the reality of women's lives at Coney Island at the turn of the century.

I found some truly disturbing illustrations in contemporary books in the collection at the Brooklyn Historical Society. They underscored the predatory atmosphere of the beaches, from the elites of the Oriental Hotel to the day-trippers of Dreamland, Juno, and Steeplechase.


"Bathing at the West End" shows a couple that looks to me as anything but harmonious. The man is holding her from behind, gripping her arm, as she half bends over, perhaps even in an attempted escape, pushing her derriere at him.

The other illustration, "Waiting for a Swell," may seem less menacing, as it is of a young woman alone. But in the vernacular then popular, "swell" does not mean a wave, it means "A man dressed in the height of fashion of high social position," according to Webster's. She's looking to hook a successful man, is the intent of the illustrator. And it's upsetting to see another young woman bent over, flirtatiously offering her derriere as her most important asset.

These are not the only such visual depictions of women's status at the turn of the century on Coney Island. As much as I don't enjoy thinking of young women fighting their way through these leering, predatory settings, it was necessary to my creation of a realistic world for my novel, set in 1911.

There's a reason they called it the "Gilded Age." Taken from a title of a Mark Twain book, it means that beneath the surface glamour and beauty there was rot underneath. And the truth of Coney Island during its heyday at the turn of the century was complex. There was fun to be had, certainly. But in contemporary writing I found writers warning of crime--day-trippers were occasionally robbed and eager investors often fleeced--and also a distinctly dark side to the place for both men and women.

In the August 1899 issue of "Munsey's Magazine," someone named Walter Creedmore writes in an article titled "The Real Coney Island" that "every one capable of furnishing a sensational newspaper story" is drawn there along with "eloping couples" and "those whose lives have been spent in dishonest or disreputable pursuit."

He goes so far as to write:

"There is a serious side to Coney Island. Upon its wave washed shores the flotsam and jetsam of the great city at whose outer gate it lies is tossed with every tide, and many is the choice bit of wreckage that rewards the vigilance of the early morning beach comber. Hman bodies are cast up there, the remains of unfortunates who have sought release from suffering in the dark waters of the East River, or of the victims of man's rage or cupidity that have been made away with and dropped off the end of a pier. In the same way the island has become a haven for living human wreckage, to whom its glare and bustle and noise offer an irresistible attraction."


"Living human wreckage." Is this a realistic description? Or do the happy shouts of the uninhibited sound like the cries of the damned to this writer, someone who is definitely not greeting the 20th century with open arms...? It's impossible to tell from this distance. But the warning is worth reading.

Dreamworld features women and men leaving the Gilded Age and the Long Edwardian Afternoon for the run-up to World War One and, beyond it, the Roaring Twenties. I wrote about different nationalities, religions, and classes in a time when that meant different expectations--and dangers.

And it's studying the paintings, photos, and illustrations as well as of the writing of this other time and place that helped me get there. 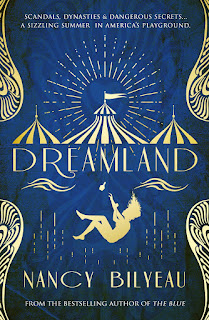 Dreamland is available as a paperback, ebook or audiobook in the United States, United Kingdom, Canada and Australia. To order, go here.


Posted by Nancy Bilyeau at 7:09 PM No comments: