Those who study the Tudor era are often astounded by how Henry VIII could spurn, exile or kill his wives, sometimes without much evidence of a conscience. But it was just as dangerous to be the king's friend. 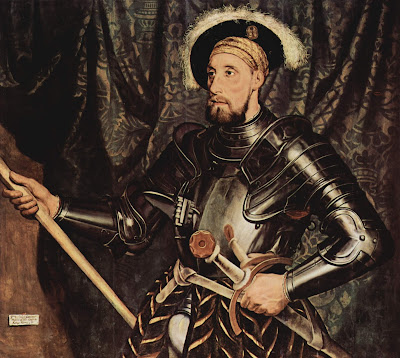 Sir Nicholas Carew was placed in the household of Prince Henry at age six. They were close friends for almost forty years, sharing a passion for jousting. Carew was knighted by 1517, made a Knight of the Garter, and held the important post of Master of Horse. He was a member of the Privy Council and served as a trusted diplomat. His beautiful wife, Elizabeth, was rumored to be the king's mistress before Nicholas married her. Henry VIII had given her some jewelry, including diamonds and pearls.

Although related to Anne Boleyn, Nicholas Carew worked with Thomas Cromwell to turn the king against Anne and replace her with Jane Seymour in 1536. It's unclear if he was motivated by personal dislike of Anne or sympathy for Katherine of Aragon and Princess Mary. Eric Ives, Anne Boleyn's biographer, describes Carew as "one of her most bitter enemies." But whatever motivated him, he was a key member of the "Aragonese" faction. They would all of them deeply regret forming this alliance with Cromwell.  In the next few years he dedicated himself to their annhilation.

In 1538 several of the king's relatives on his mother's Yorkist side were accused of plotting against the king. The evidence was very weak; nonetheless, Henry Courtenay, marquis of Exeter, and Henry Pole, Lord Montagu, were arrested and executed. (Pole's mother, the countess of Salisbury, was beheaded in 1541. His young son disappeared in the Tower, never to be seen again. Courtenay's son, Edward, was imprisoned until the reign of Queen Mary.)

Carew was disturbed by the arrests in the "Exeter Conspiracy" and the methods Cromwell used to destroy these men he'd known nearly as long as Henry VIII. He said, "I marvel greatly that the indictment against the lord marquis was so secretly handled and for what purpose, for the like was never seen." Around the same time Henry VIII and Carew quarreled over something, and Carew told his old friend  "an answer true rather than discreet."

On this "evidence," Carew was arrested. On Jan. 14, 1539, he was indicted, and on March 3rd he was taken to Tower Hill for execution, as had been Henry Courtenay and Henry Pole before him.

In his speech to the crowd, "he made a goodly confession, both of his folly and his superstitious faith." And with that, the king's oldest friend was killed.

The Exeter Conspiracy is central to the story in my second novel, The Chalice.

The Death of Katherine of Aragon

The first wife of Henry VIII, born a Spanish princess, married to him for more than 20 years, died this day in 1536. She was far from the court, in pain, abandoned except for those friends and servants brave enough to console her, without family by her side. The king had forbidden their daughter Mary from seeing her for years. The king himself rejoiced at her death, with his second wife, Anne Boleyn. There were many lessons in his treatment of Katherine, ones that most of his subsequent five wives chose to ignore.

She is buried at Peterborough Abbey, now Peterborough Cathedral. Her husband would not give her a queen's funeral. She was buried as the widow of his long-dead brother, Arthur Tudor. 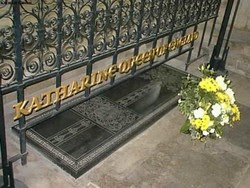 The Peterborough Cathedral community embraces their role as the caretaker of the proud queen. This year there will be a festival throughout the month celebrating her, with services and lectures. Dr. James Foyle will give a talk on Friday January 29th on "The Forgotten Origins of the Tudor Rose." To learn more, go here.

Katherine is a character in my book The Crown, and plays a central, mentoring role in the life of my protagonist, Joanna Stafford.

My Interview With Ian Rankin

I'm also a magazine editor and nonfiction writer. As the editor in chief of The Big Thrill, the online magazine of International Thriller Writers, I edit stories on the suspense-fiction genre and interviews, LOTS of interviews. A few of them I write myself, such as Sue Grafton in October.

This month I am proud to share my story on Ian Rankin, whose crime-fiction novels capture modern-day Scotland (they call it tartan noir!) with intricate stories. I'm struck by his complex views on morality, and during our hour-long conversation, I learned that he is someone who thinks about the reality of evil. He may not have obsessed over Thomas Aquinas' writings, as I did when writing The Crown, but man's capacity for darkness is on his mind a great deal

His new novel, Even Dogs in the Wild, "is about having to pay for past sins," he told me. 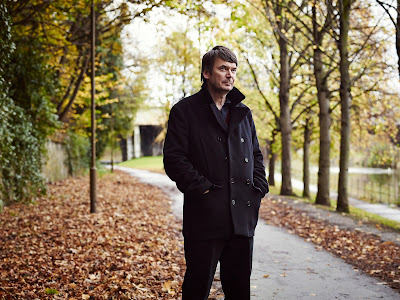