This post is one in a series on the monastic ruins of England, "In Lone Magnificence, a Ruin Stands" *

One of England's oldest ruins, Thetford's Priory of St. Mary is rich with drama. It was an East Anglian priory important to not only the Cluniac monks who lived there for 436 years but also the aristocratic family that buried their dead there. A powerful duke's struggle to protect Thetford from Henry VIII's Dissolution of the Monasteries proves just how impossible a quest that was.

The Founding: Hugh Bigod was a knight of Normandy who crossed the channel with Duke William. As one of the victors in the Battle of Hastings, Bigod reaped rewards of land and title, becoming the first Earl of Norfolk. He had at some point vowed to make a pilgrimage to the Holy Land. In his old age, Bigod was allowed to commute his vow to the founding of a monastery. By 1103, twelve monks arrived in Thetford, and Bigod and the new prior developed an ambitious plan. The buildings were arranged around a central cloister, enclosed by covered walkways. There was a church, dormitory, chapter house, prior's lodgings and barns. 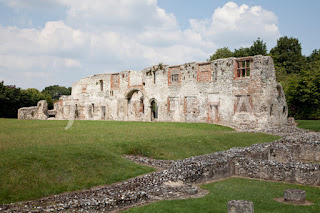 But the eighth day after the stone-laying, Bigod died. What should have been a somber entombment of a noble patron turned into an angry dispute. The monks claimed the earl's body, saying that he should be buried in the priory as was specified in their foundation charter. But the Bishop of Norwich insisted that his cathedral, founded in 1096, had jurisdiction. The monks buried Bigod in the priory anyway; the bishop retaliated by stealing the body in the middle of the night and dragging it to Norwich.

It was the first time that a corpse was forcibly removed from Thetford Priory. It would not be the last.

The Order: The Order of Cluny formed in 10th Century Burgundy as an offshoot from the Benedictines. They were determined to follow a more rigid interpretation of the Rule of St. Benedict and to steer clear of political and military matters of the world. More than 30 Cluniac priories were established in England. Some became wealthy. Thetford's fortunes waxed and waned. In the early 14th century, the king had to take the priory into his protection because of its "poverty and indebtedness." Later the monks were able to run the house again with some efficiency.

The Glory: In the mid-13th century, an artisan of Thetford, suffering an illness, dreamed that the Blessed Virgian appeared and told him that he should persuade the prior to build a chapel on the north side of the church. Moved, the prior set to work on a stone Lady Chapel.

When it came time to place a statute of Mary in the chapel, the monks selected an old wooden image that had been in storage. But when they removed the statue's head to restore it, they discovered a cache of relics, including the "grave-cloths of Lazarus," along with a letter from the Church of the Holy Sepulchre in Jerusalem. Thetford became a center for pilgrimages to see the statute and relics, and pilgrims claimed many cures.

But the priory witnessed violence too. The second prior, Stephen, turned Thetford into "a house of debauchery" and caroused with local knights. An enraged Welsh monk stabbed the prior to death; the monk, in turn, was arrested and spent the rest of his life in the prison of Norwich Castle.

Even more disturbing, in 1313, a riot broke out in the priory. A mob forced its way in, assaulted the prior and murdered several monks at the high altar who were trying to protect their valuables from being stolen. An inquiry in town did not reveal why such a horrific attack took place, but protection was increased for the prior and surviving monks.

The Dissolution: The Howards assumed the titles of Norfolk in 1483, when Richard III, grateful for the family's support as he seized the throne, made John Howard the 1st duke of Norfolk, in the third creation of the dukedom since the Bigods. The first duke was the commander of Richard III's vanguard at the Battle of Bosworth, and was slain alongside his king. Howard was buried in Thetford Priory.

His grandson, Thomas Howard, third duke of Norfolk, was one of the senior peers and most important councillors of Henry VIII. He was a major landholder of East Anglia, possessor of many castles and titles, a feared military commander. His first wife was a princess of the House of York; his second was the eldest daughter of the duke of Buckingham. Norfolk is today perhaps best known for being the uncle of both Queen Anne Boleyn and Queen Catherine Howard, two alluring women whom, it was said, he helped place in the king's circle.

Norfolk held conservative religious views, but that didn't stop him from eagerly taking possession of monasteries that fell during the break from Rome and the Dissolution. The king handed out fallen abbeys and their surrounding property to courtiers to strengthen their loyalty to the crown. But as more and more priories and abbeys "surrendered," the duke began to fear for Thetford.

The priory held enormous spiritual value for the Howards. In the medieval age, a person's achievements would be honored and their soul remembered if a certain number of Masses were said. If that person were buried by his heirs with care and splendor in a place of significance, then eternal peace was ensured. The first and second Howard dukes were interred in Thetford's grand church, connecting them to the earliest holders of the Norfolk titles. In 1536, the king's illegitimate son, Henry Fitzroy, the duke of Richmond, was buried in the church, too, since he was also the son-in-law of the duke of Norfolk and the king had ordered Howard to take charge of the funeral.

The duke of Norfolk knew Henry VIII as well as any noble could fathom the Tudor king. Howard had served his monarch with great fervor. It was Norfolk and his father who defeated the Scottish army in Flodden; more recently, the duke suppressed the Pilgrimage of Grace. Still, the king was ungrateful to those who served him, and treacherous. He was unlikely to grant the Howards favors. So in 1539, the duke formally proposed to Henry VIII that the priory be converted into a church of secular canons. This privilege has been granted to several cathedrals. If the conversion were approved, the tombs would not be disturbed. It was not all that much to ask.

The king agreed to Howard's plan. But in 1540, the same year Henry VIII made teenage Catherine Howard his fifth wife, which everyone assumed would make the Howard family preeminent, the king changed his mind about Thetford. It would have to be dissolved like dozens of other monastic houses--no exceptions--even though his own illegitimate son, Henry Fitzroy, was buried there. Upset, the duke of Norfolk had no choice but to remove the remains of the dead dukes and duchesses (Richmond too) and transferred them to the Suffolk Church of St. Michael in Framlingham.

When, 14 years later, Thomas Howard died, he was buried there as well.

As for the Cluniac monks of Thetford, 13 signed a deed of surrender and were ejected with pensions. The church and all other buildings of Thetford were stripped of value and began their centuries of decay.

The specters: Sightings of ghosts have been reported for years, including that of monks chanting Latin or performing acts that were somewhat more frightening. When television camera crews set up one night at the priory, though, the ghosts did not see fit to show themselves. 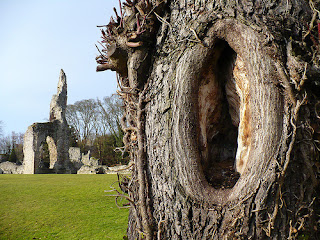 The preservation: Thetford is an English Heritage sight and its existing buildings--a 14th century gatehouse, many of the walls of the church and cloister, and part of the prior's lodgings--can be visited most days of the year. For more information, go to http://www.english-heritage.org.uk/daysout/properties/thetford-priory/.

Nancy Bilyeau is the author of The Crown, The Chalice and The Tapestry, mysteries set in the 16th century and featuring a Catholic novice. They are published by Simon & Schuster in North America and the United Kingdom.
Posted by Nancy Bilyeau at 6:33 AM 2 comments: