One of the reasons I'm so captivated by the 16th century is the complexity of the people who lived then. Among the real-life characters of the Tudor court who I find endlessly fascinating is Jane Boleyn, born Jane Parker and for much of her life called Lady Rochford. She has for years been depicted as quite a villainess, a woman who supposedly testified against her husband George Boleyn after his arrest in the treason conspiracy launched against his sister Queen Anne, and who was later executed for her part in the adultery conspiracy of Catherine Howard, fifth wife of Henry VIII.

But in recent years, there has been a backlash against the negative view of Jane Boleyn, one that claims there is no evidence of her being the one to testify against her husband, and to substantiate the shocking charges of incest with the queen. Has Jane been defamed by history, by historians, novelists and screenwriters? 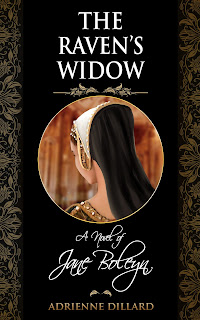 I have the good fortune to interview Adrienne Dillard, the author of the new novel The Raven's Widow: A Novel of Jane Boleyn. I enjoyed this historical novel very much. Adrienne created nuanced portrayals of all the members of the Boleyn family, and put me inside the court of Henry VIII. I am rethinking a lot of my perceptions!

We're both lovers of Tudor history. I've found there's always a spark that leads us there. For me it was watching "The Six Wives of Henry VIII." What triggered your interest in the Tudors?

I've always been a huge fan of all eras of history, but I came to the Tudors as an adult. After my step-father died in January 2008, I tried to get my mom out of the house as much as possible. She must have been really desperate to get out one afternoon when I convinced her to go see The Other Boleyn Girl in the theatre...It's definitely not her normal cinema fare! Throughout the movie, I just kept thinking that there was something off about it, but I didn't know enough about the period to nitpick. That night I picked up Eric Ives' brilliant biography and I was off and running.


Was Jane Boleyn the most compelling member of the Boleyn family to you from the beginning?

No, not at all. I really had no connection to her. I was lucky enough to find Julia Fox's biography very early on so I wasn't indoctrinated with the "nasty Lady Rochford" perspective, but she didn't really pique my interest until after I wrote my first novel. Thanks to TOBG, I was always really drawn to Mary and her children. It wasn't until I made the difficult decision to have a surgery that ended my ability to have children that Jane really came into my consciousness. The surgery happened right around the anniversary of her execution so her story was all over my social media while I was laying around at home feeling sorry for myself. Here, I had a healthy son, but she died utterly childless in a time and place where that was practically unacceptable. How would she have felt about that? That was when I really connected with her.


How did you arrive at your conclusions about her character that led to your depiction of her in the novel?

Fox's biography played a huge role in how I saw Jane and really changed the way I looked at the historical record. She planted a seed of the idea that scribes have biases...and you can see that play out even now. Look at all the books that have come out about the recent election we just had in the US. They all offer behind the scenes "facts" about the events and the politicians involved, but each one has its own slant based upon the writer's ideologies. This is nothing new, it's been going on since the first recordings of history. With that perspective in mind, I went back to the primary documents and began reconsidering their sources. The Jane that emerged was far more complex. She wasn't a saint by any means, but she was humanly flawed. She made decisions that make you want to scream, "No! Why would you do that?!" But having gone through the tragedy of my mother's widowhood, I could identify many of her more irrational choices as symptomatic of someone dealing with terrible grief.

What is the "fact" about Jane that frustrates you the most, the thing you consider untrue but most people believe?

I think it's the "fact" that Jane hated her husband or was jealous of Anne. There really is no proof of that. In fact, I would argue that the sources show just the opposite.

Oooh, that is a good question. I wish I knew! I would imagine that she was probably unremarkable in appearance or else there would have been some commentary on it. If she looked like her father, she may have had striking eyebrows and a distinctive nose; a long, slender neck and high cheekbones. I hope that maybe, one day, a portrait will be unearthed that we can say is conclusively her.


How did you come to the conclusion you did about her procreative situation? (Trying not to do spoilers)

To put it simply: the values of the time. Even if Jane had the most miserable marriage on record (doubtful), there is no way that they were not trying for children. As Anne got closer to the throne, the Boleyn's wealth and influence was growing. George was the sole heir to an Earl. It was imperative that he procreate. The fact that they cohabitated for at least a decade without issue led me to believe that either one, or both, struggled with infertility.

Actresses usually play her as a villain. How do you feel about that?

Well, annoyed for sure, but also BORED with it. It's such a lazy way out and so cookie-cutter. It's far more difficult to play someone who operates in a grey area, capable of both good and folly.


There were other maids who helped Catherine Howard with her secret meetings with Culpeper. And no maid of honor or lady in waiting was arrested in the case of Anne Boleyn. Why was Jane singled out?

I think her involvement really infuriated the king. Here, he and Cromwell (who was very connected to Jane's father) had "saved" her from the Boleyns, helped her get her jointure, gave her a place at court, and this was how she repaid him. What impertinence! She had to be punished. Better yet, one last reminder of his Howard wives out of the picture. In Henry's eyes, she had to go.


How did you come up with the structure of two timelines for the novel? I liked that!

Thank you! My goal in writing this story was to show the affects of grief. In many cases, the person you were before a tragedy is vastly different than the person you are after the tragedy. I wanted to show Pre-1536 Jane and Post-1536 Jane side-by-side so you could see the differences clearly...and maybe, perhaps, come away with an explanation for her involvement with Katherine Howard. We are who we are because of our life experiences; in this structure, you could immediately see those connections.


I also liked your depiction of day to day court life for Jane and her husband . How did you research that?
Henry's household records are a treasure trove! His inventories for food and masques, gambling and travel all painted a pretty detailed picture of what the court was doing from day-to-day. Another excellent resource is the Lisle Letters. They are jam-packed with information and gossip about the goings-on at court. Plus you get a very intimate look at all the requirements for maids during the sections that deal with Anne Bassett's court career.

Nancy Bilyeau is the author of a trilogy of Tudor mysteries: The Crown, The Chalice, and The Tapestry, sold in North America, the United Kingdom, Spain, Germany, Russia, and several other countries,