THE CHALICE wins for Best Historical Mystery from Romantic Times

I'm thrilled to share that THE CHALICE won against some unbelievable competition (Anne Perry?!) and I will be traveling to New Orleans for the first time in my life to accept the award in person. 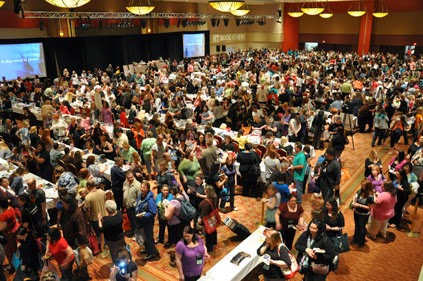 Because I have a French last name, people sometimes assume I am from New Orleans and they're surprised to learn I haven't even been there. Or else they think I am French Canadian. But no, my French predecessor came to what was then New Amsterdam (now New York City) in 1661.

In any case, this is going to be a wonderful experience! I can't wait to meet fellow authors and readers at the RT Booklovers Convention.

To read the list of winners and nominees, go here: http://bit.ly/1sP66BI


Posted by Nancy Bilyeau at 7:03 AM No comments:

I've been tagged by historical fiction author Rosanne E. Lortz, and now it's time to tell you about the star of my trilogy.

1.) What is the name of your main character? Is she fictional or a historical person?

Joanna Stafford, also known as Sister Joanna, a Dominican novice. She is fictional, but the Staffords were a real family, headed by Edward Stafford, the duke of Buckingham, executed for treason in 1521.

The first novel, The Crown, begins in May 1537 and by the end of The Tapestry, the story reaches the end of 1541. And the story is set in England—in the Dominican priory of Dartford, Kent, and in London and Canterbury and Malmesbury—but it also plunges into other parts of Europe. Joanna gets into some harrowing adventures in Flanders, France, and Germany.

3.) What should we know about him/her?

Joanna is half-English and half-Spanish. Her father was a handsome younger son best known for his tournament jousting skill and her mother was a maid of honor who came with Catherine of Aragón to marry Prince Arthur. Joanna, black-haired and brown eyed, is loyal, pious, smart, and talented, particularly in tapestry weaves and embroidery. She also gets angry quickly and finds it hard to hide her feelings. Oh and she is stubborn.

4.) What is the main conflict? What messes up his/her life?

Joanna has a true calling to be a nun, but this is exactly when Henry VIII is destroying the monasteries of England in his break from Rome. Joanna tries in many ways throughout the trilogy to protect her way of life and her loved ones, but this leads her into some dangerous quests and conspiracies.

5.) What is the personal goal of the character?

Joanna from the very beginning rejects the conventional aristocratic life of marrying a nobleman's son and/or waiting on a queen. She wants to find a life for herself of meaning and significance.

6.) Is there a title for this novel and can we read more about it?

There are three: The Crown, The Chalice and The Tapestry. They are on sale in North America, the United Kingdom and Germany. Spain and the Netherlands will publish The Tapestry in 2016. More info here: www.nancybilyeau.com

"The Chalice" Is "Never Boring"

Very pleased with the review of my second novel on medievalists.Net!

"Much like its predecessor, The Crown, The Chalice is a fast paced late medieval/early modern mystery thriller centred around a strong female protagonist – the pious Joanna Stafford. I enjoyed Bilyeau’s second book, the plot is full of twists and turns, never boring..."


Posted by Nancy Bilyeau at 7:32 AM No comments: