A fellow member of the Historical Novel Society, Julieta Almeida Rodrigues, published a fascinating novel, Eleonora and Joseph: Passion, Tragedy and Revolution in the Age of Enlightenment. I asked her recently about what's next in her writing plans.

JAR: Interesting that you should ask this question because your novel The Blue is still very much in my mind today, though I read it in 2018. At the time, I wrote a very short Review that read:

What I most loved about The Blue by Nancy Bilyeau is the idea! How art and money combine to form a magnificent 18th century tale of international espionage. As the daughter of a Portuguese collector who did not miss a porcelain sale in the famous Lisbon auction houses, I was brought up with the notion that the blue to be found in exclusive pieces was invaluable. As a child, I lived with these pieces around me. As an adult reader, I loved going back to The Blue and see how, in retrospective, my father had been so justified in his choice of what he sought to collect.

Three years later, I am starting a novel that incorporates your idea: that art and money combine in ways that are set to pleasing the eye and can lead to awe-inspiring plots. I am not going into details for the moment; I will only mention that I found a narrative for a work of art that I saw in Istanbul in 2013. It is an extraordinary piece, dating from the late eighteenth century, that makes me shiver every time I look at its reproductions. Two friends of mine from Columbia University wrote a non-fiction book about it. I recall their surprise – and their encouragement - when I said I would like to write a novel incorporating their work.

Anyway, I designed a plot that combines two settings that are very dear to me: the area of Ajuda in Lisbon – where the attempted assassination of King José of Portugal (1714-1777) took place - and Constantinople (as Istanbul was known until the end of the Ottoman empire), where the piece of art I am referring to was conceived.

The way ideas travel is wondrous at times. I just finished The Museum of Innocence, the novel by Orhan Pamuk, the Turkish Nobel Prize winner. I also read The Innocence of Objects, the illustrated catalogue of the objects which are part of the museum that Pamuk opened to bring the book alive. Pamuk says his idea for the novel and the museum came at the same time. His notion that objects have a life of their own is rather intriguing. I enjoyed this ideia much more than the love story; I found the romance tiresome at times. Pamuk says some collectors are bashful – they have a wound hidden inside a broken heart – and their collections are a consolation, a palliative for an invisible pain. I had never thought about it this way, but this was certainly the case with my father.

Then he makes another challenging assertion. He says, “Our museum has been built on the contradictory desires to tell the stories of objects and to demonstrate timeless innocence.”

Do objects have a timeless innocence? I find this view rather poetic. Objects conjure up feelings; but are they more innocent than people, if wittingly or unwittingly, we happen to compare them? The blue pigment of the porcelain pieces in your novel, The Blue, is far from innocent – and I love it that way!

Nancy, thank you very much for this opportunity; I appreciate it. The beginning of a novel is a state of elation, and I feel very much at that threshold!

You can find out more about her novel on Goodreads. 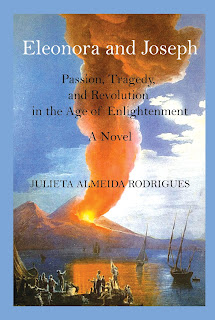 To learn more about Julieta, go to  https://www.julietaalmeidarodriguesauthor.com/

Posted by Nancy Bilyeau at 3:15 PM No comments:

I'm honored to be among the authors on a library panel discussing the research and writing of crime fiction on Tuesday, September 14th.

Anyone can watch this panel--it's online and free. You just need to register ahead of time. To do so, go here: https://newcity.librarycalendar.com/events/police-procedurals-cozies-and-historicals-writing-and-researching-crime-books 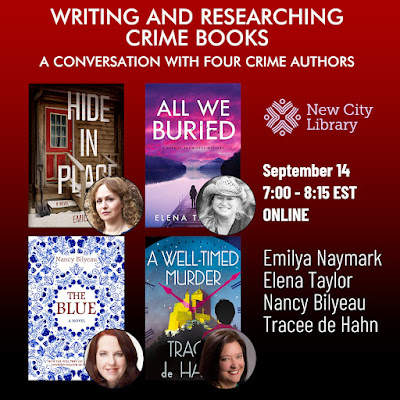 Posted by Nancy Bilyeau at 7:47 PM No comments: