Brooklyn's Gilded Age: The Grand Hotels on the Atlantic Ocean

More than 100 years after Coney Island earned the nickname of "America's Playground," it is still a famous place.

Far less well known is the trio of large hotels that rose in Brooklyn less than a mile away from the amusement park. They were built in the Victorian age and intended to serve discriminating guests in the most elegant manner. Many of their guests never set foot in Coney Island's competing amusement parks of Steeplechase or Juno--or Dreamland, after it opened in 1904. They existed in a parallel world, sharing the beach on the Atlantic Ocean with Coney Island but little else.

The phrase "New York Gilded Age" summons up images of dazzling Vanderbilt mansions, Grand Central Station and the Plaza Hotel, all in Manhattan. But the hotels on the ocean in Brooklyn played a crucial role in this period. They were widely admired, visited by presidents, famous inventors like Thomas Edison, and European nobility.

People today can travel to Coney to ride the Cyclone or the Wonder Wheel or devour hotdogs at Nathan's. The hotels, however, were finished by the 1920s and today they are physically gone. Houses, apartments, synagogues, and the Kingsborough Community College sit atop the hotels' foundations. Theirs is a lost world.

I set my historical mystery Dreamland in not only Coney Island but the Oriental Hotel, the most elegant of the three and attracting the wealthiest guests from 1880 to 1916. Families would stay the entire summer at the Oriental. In this article, I'll share my research into this fascinating time and place.


The first of the grand hotels to be built was the Manhattan Beach Hotel. Picking this spot went beyond catering to people's fondness for an oceanfront resort. In the 19th century, people believed that the region was good for your health, even curative.

In the 1870s, railroad tycoon Austin Corbin spent some weeks at a small oceanfront hotel owned by William Engelman because his son was in poor health. While there, he decided the property was ripe for development and he formed a syndicate of investors to snap up the land.

The biggest challenge was transportation. But once that was solved--use steamboats and build railroad lines leading right to Coney Island--a vast hotel was designed by architect J. Pickering Putnam. It was all wooden, 400 feet long. President Ulysses Grant attended the opening ceremony for the Manhattan Beach Hotel, which was within a year dubbed "the best hotel on the Atlantic Ocean." Souza wrote a song expressly for the hotel.

It had 300 guest rooms, a ballroom, a bandstand, and a restaurant that could seat thousands. In its long veranda, it resembled the larger hotels in Saratoga Springs.

A Scribners Magazine correspondent wrote about the hotel:


What a charming view of the sea. A wide esplanade between is green with turf and gay with flowers--geranium, helitrope, lobelia...In the center is a music stand shaped like a scallop shell. The beach below is full of parasols and summer costumes bright against the water.


Businessman James Jordan leaped in to compete with Corbin, building the Brighton Beach Hotel. It's believed that Corbin was trying to outdo the man who was struggling to outdo him when he built the Oriental Hotel.

The Oriental Hotel, some 1,000 yards east of Corbin's Manhattan Beach Hotel, was the most opulent of the three, with a "Moorish" motif.   It was six stories high, 478 feet long, with eight large circular towers surmounted by a minaret. There were about 480 sleeping rooms, and an elevator.

During the day some guests would swim in the water, using the "bathing pavilions" to change. Hot air balloon rides also beckoned, as well as bicycling and tennis. In the evening, people dressed for dinner, dining on lobster, littleneck clams, lamb and other such dishes. There were fireworks at night, concerts, and spectacles acted out on the lawn.

One year The Brooklyn Eagle said about the Oriental Hotel guests that the descendants of four American presidents were staying  there as well as "the usual quota of barons, dukes, counts and foreign attaches."

According to The New York Times, Thomas Edison and Henry Ford met for the first time in 1896 at the Oriental Hotel, while in Manhattan Beach for a conference. "It had the greatest men of the day as its guests," said the paper.

Yet all this time Coney Island was exploding nearby as a resort drawing the factory workers and office workers, the middle-class families of New York for day trips. People came intending to enjoy themselves--and they did.


There was little if any mingling. The hotels employed Pinkertons and other guards to keep the Coney crowd out. Worse, Corbin was an anti-Semite who said publically that Jews were unwelcome. Blacks were discriminated against as well.

After Corbin died in 1896, some of the bigotry eased. But stylish tastes were changing. The richest families in New York preferred Newport or other out-of-town resorts. Still, many men with means continued coming out for the season to follow the horseraces--there were three large racetracks in the region, making Brooklyn the horse-racing capital of America. The Vanderbilts and "Diamond Jim Brady" favored the Coney Island Jockey Club.

As the large hotels began to fade in popularity, the amusement parks of Coney Island reached their peak in the fantastic and the imaginative. People came from all over the world to see them. It was hard to think that hotel guests would be completely satisfied with sea bathing and concerts with these larger-than-life amusements so close at hand.

When gambling was banned in the state in 1910, it dealt a fatal blow to the grand hotels. The Manhattan Beach Hotel was demolished in 1912; in 1916 the Oriental Hotel fell to the wrecking ball.

The era of the grand hotel in Brooklyn was no more.


Nancy Bilyeau's fifth historical novel, Dreamland, is set in 1911. Rebellious young heiress Peggy Batternberg reluctantly accompanies her family for a holiday at the luxurious Oriental Hotel, on the Atlantic Ocean. But less than a mile away, Coney Island, “America’s Playground,” beckons with forbidden delight — and danger for Peggy and those she loves most. A story of corruption, class, and dangerous obsession.
The novel received starred reviews from Publishers Weekly and Library Journal. 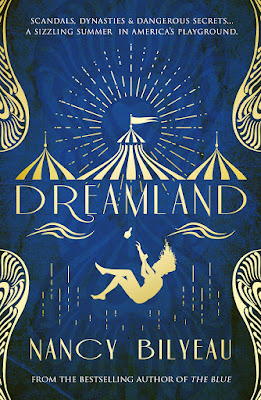 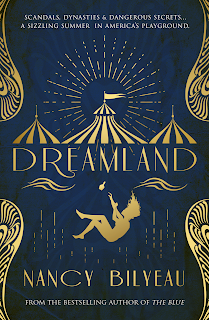 My fifth historical novel, Dreamland, is available in North America, the United Kingdom, and Australia, in paperback and ebook formats. (Audio book to follow soon.)

New York City, 1911: Rebellious young heiress Peggy Batternberg reluctantly accompanies her family for a holiday at the luxurious Oriental Hotel, on the Atlantic Ocean. But less than a mile away, Coney Island, “America’s Playground,” beckons with forbidden delight — and danger for Peggy and those she loves most.

To write this story of corruption, class, and dangerous obsession, I did research at the Coney Island Museum and New York Public Library; I read books on the Gilded Age, the "Robber Barons," and the turn-of-the-century grand hotels; and I immersed myself in fiction written around this time by Edith Wharton, E.M. Forster, Thomas Mann, and F. Scott Fitzgerald.

To order Dreamland in the U.S, go here. The ebook is $4.99 and is in Kindle Unlimited.


Go here for ordering the novel in Canada, the United Kingdom, and Australia.

“I could practically taste the salt-water taffy and smell the ocean air as I read Bilyeau’s latest, set in 1911 Coney Island. Beautifully written and impeccably researched, DREAMLAND is a rollicking ride.” — Fiona Davis, bestselling author of 'Chelsea Girls'

“DREAMLAND is like the best chocolate: rich, dark and satisfying.” — Libbie Hawker, author of The Ragged Edge of Night

"A marvelous book!" — Ellen Marie Wiseman, author of What She Left Behind

'Bilyeau is at the height of her talents in the immersive and gripping DREAMLAND' — Heather Webb, USA Today bestselling author

'An outstanding thriller...This fascinating portrait of the end of the Gilded Age deserves a wide audience.'

Posted by Nancy Bilyeau at 1:00 PM No comments:

'The Crown' is a Chirp Deal


I'm pleased to share the news that 'The Crown' has received a Chirp deal, meaning that for the next month it costs only $2.99 for an audiobook--and not the usual price of $24.95!

'The Crown' was my first novel. It went on sale in the US in January 2012, and was purchased by more than a dozen foreign markets, from Germany to Brazil.

As the Chirp page says:


“Compulsively readable” (Booklist): Set in England during Cromwell’s reign of terror, nun Joanna Stafford must find a powerful ancient relic — or risk the safety of herself, her family, and even her society. A historical page-turner that Woman’s Day called “part The Da Vinci Code, part The Other Boleyn Girl.”

In this debut historical thriller, an aristocratic young nun must find a legendary crown in order to save her father’s life and preserve all she holds dear.
When novitiate Joanna Stafford learns her rebel cousin is condemned by King Henry VIII to be burned at the stake, she makes the decision to break the sacred rule of enclosure and flee her Dominican order in Dartford to stand at her cousin’s side.
Arrested for interfering with king’s justice, Joanna, along with her father, Sir Richard Stafford, is sent to the Tower of London. Joanna’s father is brutally tortured by Stephen Gardiner, the Bishop of Winchester, who leads the Catholic faction bent on saving England’s monasteries from destruction. In order to save her father, Joanna must submit to Gardiner’s will and become a pawn in the struggle between religious extremes. Gardiner forces Joanna to return to Dartford Priory with a mission: find the long-hidden crown worn by Saxon King Athelstan in AD 937 during the historic battle that first united Britain. Gardiner believes the crown itself to possess a mystical power that will halt the Reformation.
Uncovering only dark betrayals and murder at Dartford, Joanna flees with Brother Edmund, a troubled young friar, and with time running out, their hunt for the crown leads them through royal castles, to Stonehenge, and finally to the tomb of the mysterious King Athelstan under Malmesbury Abbey. There Joanna learns the true secret of the crown—a secret tracing all the way back to Golgotha and the relics of the Passion—and must finally determine who to trust and how far she is willing to go to protect a way of life that she passionately loves.