Judith Starkston writes fantasy imbued with the richness of ancient worlds, diving into the lore of the Greeks and Hittites. I first met Judith at the Historical Novel Society Conference in St. Petersburg, Florida, in 2013 and found a kindred spirit. I've enjoyed reading her novels as well as her fascinating nonfiction posts.

October 15th is the release date for her novel Of Kings and Griffins, inspired by the
historical Hittite empire and its most extraordinary queen. Here's a description:

For Tesha, priestess and queen, happiness is a world she can control, made up of her family and the fractious kingdom she and her husband rule within the Great King’s empire. But now the Great King   is dead, and his untried son plots against them. Tesha fights back with forbidden sorcery and savvy. In  yet another blow, the griffin king lures Daniti, Tesha’s magical blind sister, into a deadly crisis that  Daniti alone can avert.

As danger ensnares everyone Tesha loves, her goddess offers a way out. But can Tesha trust this offer of divine assistance or is it a trap—one that would lead to an unstoppable bloodbath?

To order this novel, go here. 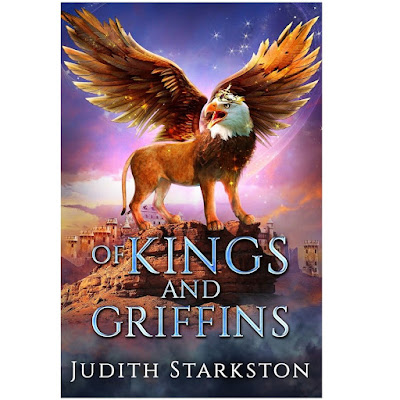 Were you drawn to this period and place first and then came up with your main character, or did you want to specifically write a main character who is like Tesha and then found the best place for her?


Judith Starkston: My main character is based closely on a Hittite queen who was all but forgotten by history. When the historian-me discovered her, the fiction-writer-me fell in love. She ruled for decades over one of the most powerful empires of the Bronze Age (stretching over modern Turkey, Syria, Israel), a successful woman leader within a patriarchal culture. Her smarts and the kinds of conflicts she overcame drew me, as well as the daily life and customs of the time.


What did you base your descriptions on of daily life for your characters?


Judith Starkston: Fortunately, archaeology has brought much of the culture of the Hittites to light, uncovering details such as their foods and spices, clothing, and their homes, temples and palaces. I have traveled extensively in Turkey to study museum collections and site excavations. Of equal importance to depicting daily life are the archives of clay tablets that have been uncovered and translated. The historical woman, whom I call Tesha in my fiction (her real name was Puduhepa), was both a queen and a priestess. The tablets describe rites she performed—rituals we call magic. We don’t think of magic as
an integral part of our daily life, but it was for her. Without those records, I could never
have brought to life this psychologically fascinating aspect.


How would you describe the violence in war during this time compared to that of the
Trojan War period you wrote about in an earlier book?


Judith Starkston: The Trojan war (whatever form it may have had historically) took place on the  western edge of the Hittite empire roughly in the same century as the reign of the queen I write about—so they aren’t really two separate periods.

Violence in war is woven tightly into Tesha’s world, as it was for Troy. She’s famous for
corralling her empire’s greatest rival, Ramses II, the pharaoh in the Biblical story of
Moses, into a peace treaty that suited her needs far more than his—and it lasted. But
that happened later in her life.


In my books so far, I’ve focused on the early part of her story as she meets the great
love of her life and follows a very bumpy road to power. In Of Kings and Griffins, one of
those “bumps” is an ongoing war with tribes who lived in the northern part of Anatolia
and viewed that land as their homeland even though the Hittites also claimed it, a
classic intractable conflict not unlike several in the world today. Each side gave the
other reasons to hate. I depict those realistically—raids, kidnappings, blinding of
prisoners, for example—while also showing my characters trying to find long term
solutions to that conflict, such as shared settlements and basic respect that sees past
old hatreds.


The combination of moral principles and pragmatism that this queen’s letters and other
records reveal is a big part of what drew me to her, although I enjoyed in this latest book
showing her struggling to find the balance between what’s “right” and what will actually
work—and not always succeeding. Knowing how to trust others and letting them do
things their way is part of her growth as a leader—even when those “others” include
griffins!


What was it like to be a royal woman in this time compared to the Greek world and
later Roman world?


Judith Starkston: Hittite women, royal and not, had a surprising array of rights that Greek and Roman women, for the most part, did not have, such as owning property and keeping custody of children in divorce. We think of history as progressing, but with women’s rights, the process goes in cycles that may need our repeated attention. Familiarity with the Hittites
is fruitful for that ongoing process.


As for royal women, Hittite queens came to power in conjunction with their husbands,
but if their husbands died, they continued to rule. Legally they were equals to their
husbands, although most of the queens did not exercise that power, so there must have
been a lot of pressure from customs that viewed women as inferior. In contrast, “my”
queen did act as an equal, famously so within her time period. She was much admired
for her independence and strength.


On the downside, Hittite kings had multiple concubines in addition to their “primary
wife.” From the children of those concubines, the kings staffed the equivalent of the
State Department and the highest echelons of the military. There’s a cultural difference
for you! Tricky as it is, I enjoy incorporating those hidden women in my plots and
confronting the issue of concubines. Tesha and her husband are said to have had a
very happy marriage, but that doesn’t mean it was without its troubles.


How do you work in the supernatural element in your novel?

Judith Starkston: Of Kings and Griffins combines history and fantasy. The part-lion, part-eagle mythical griffins are depicted pervasively in Hittite artwork. Giving griffins an
active role in my plot was so much fun. Despite the widespread visual portrayals, there
are almost no myths about them, so I had a blast creating their world and personalities.
I can assure you they are way more fun than dragons. Magnificent, invincible, with a
serious load of attitude, griffins bring a level of danger and high stakes into the world I
write that is reminiscent of what nuclear weapons brought to the twentieth century
world. They can change everything if you’re not careful—very careful. For a character
like Tesha who has to fight against her ingrained desire to control others, they pose a
major temptation—and she has the magic to interact with them.

I gave free rein to Tesha’s magic, which arose out of the historical details of the period.
The kind of magic she performs is always founded in Hittite or Egyptian procedures, but
with a scale and supernatural results outside the bounds of what we view as history, of
course. For example, there is a rite she uses regarding the griffins. I based it directly on
an Egyptian method of magically restraining the state’s enemies by performing some
dramatic activities on figurines who represent those foes. Ancient archaeology supplies
way better material than my imagination could come up with. I write historical fantasy,
not historical fiction, but you’ll get to know the Hittites very well from my fiction and have
a lot of fun in the process.


How do you take characters and plot threads from earlier books in this series and
bring them into Of Kings and Griffins?


Judith Starkston: Each of the books in this series—Of Kings and Griffins is the third—can easily be read on their own as a standalone. Readers can jump in with this latest one. However, I am following the same characters in a roughly chronological progression from one book to the next, drawing on historical events blended with the fantasy elements. If a reader loved a secondary character in an earlier book—Tesha’s blind sister Daniti often steals readers’ allegiances—rest assured, you’ll have a chance to see more of that character
in other books.


Are griffins a force as of now in historical fantasy? They seem very original to me!


Griffins are significantly outnumbered by dragons in historical fantasy, but they are
enjoying a rise in popularity. I noticed this when my cover artist was working on creating
the griffin for this book’s front—no small feat since she uses photographs and mythical
creatures are camera shy. She mentioned a 3D artist who served the growing market in
griffin artwork by developing premade griffins. Those griffins, however, were the
medieval ones of heraldry—with eagle talons and scrawny bodies. My ancient-style
griffins have four lion paws and powerful chests along with huge wings and lethal eagle
head, and they are a rare literary beast.


For a reader who knows nothing about the Hittites, how would you entice them to try
this time in their fiction?


Judith Starkston: The sophisticated and cosmopolitan world of the Hittites combines an exotic, long- ago experience for a great escape with some engaging, familiar-feeling concerns such as arrogant leadership, corruption, women in power, international intrigue,  romantic conflicts, and family.


Who are your favorite writers of ancient world fiction?


What's next for this series?

Judith Starkston: Tesha will return, along with her allies and enemies. I’ll just say that despite Of  Kings and Griffins’ hard-won resolution, the crises across the empire are about to escalate in some unpredictable but entertaining ways.

Judith has one of my favorite author newsletters, packed with interesting info, and a sensational website. To learn more, go here.