Amid the Moet-popping highs and Kleenex-box-emptying lows of publishing my first novel there’s one thing I’ve come to depend on because it never wavers: the support of other writers.


I don’t care for the word community. For me it’s weighted with a certain psycho-babblish softness, unlike those crisp, hard Saxon words I adore. Or perhaps hearing community takes me back to my first job as a journalist, covering planning & zoning meetings that stretched to midnight. As council members bickered over watershed boundaries, I chewed the inside of my mouth to stay alert.

Yet when I crack open Websters’ Third (unabridged of course) and read the definition of community I realize how precisely it fits: “A body of individuals organized into a unit usually with awareness some unifying trait.” Ah, Websters’…

Writing is one hell of a unifying trait. I discovered that in workshops  taught by novelist Rosemarie Santini and, later, Russell Rowland, and particularly in the invite-only screenwriter group called 5150 created and run by Max Adams (the number is police code for “involuntary psychiatric hold” and yes, it’s apropos).

Then, late last year, my friend and co-blogger Sam Thomas (The Midwife’s Tale: A Mystery; 2013) pulled me into a private Facebook group named Book Pregnant, populated by writers whose debut books were due to arrive in 2012 or 2013.


I was one of the first to “drop” when my historical thriller pubbed on January 10th.  My fellow “preggers,” as we sometimes call one another, posted links to my book reviews and blog posts. They bought The Crown and reviewed it on amazon, goodreads, and elsewhere. On our members’ only Facebook board, I found cheers and hugs, wisecracks and tough love as well as generous doling of publishing-savvy advice. We have jobs, spouses and children, mortgages due and houses for sale, ailing parents and doctor appointments. We’re from every part of the country: Virginia, New York, Ohio, Montana, Illinois, South Carolina, Texas, California, you name it. And we never stop checking in.

It was Book Pregnant that came to my rescue last month, after The Chicago Tribune published an author profile on a Saturday morning… or did it? The reporter told me her story would run that day, but, sitting in my New York City apartment, frantically searching the newspaper website, I just came up with zip. After I posted an “SOS” on Book Pregnant, member Amy Sue Nathan (The Glass Wives, 2013), who lives in a Chicago suburb, went out and bought the newspaper. Not only did she confirm the existence of “Tudor England Beckons Debut Author,” but she got herself photographed holding up the newspaper. 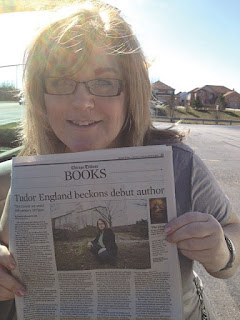 This week Amy struck again, with a lovely post on Women’s Fiction Writers entitled “How Reading a Historical Thriller About a Nun Helped Me Write Women’s Fiction About a Jewish Family.” Going out of her usual zone of reading turned out to be useful: "So, while a young nun was chasing secrets all over England, and I was learning things about the Catholic Church, kings and nuns and monks, I was also internalizing a deft hand for setting, conflict, mystery, and even a little bit of romantic tension." Awww, thanks Amy. (To read her whole blog post, go to http://bit.ly/IirJ5u)

Amy is right. I’ve already inhaled the exquisite historical novels “At the Mercy of the Queen,” by Anne Barnhill, and “The Sister Queens,” by Sophie Perinot. But these two were in my wheelhouse, frankly.  I just bought The Rules of Inheritance, a dazzling memoir of harrowing loss written by Book Pregnant member Claire Bidwell Smith. I don’t read that many memoirs--and here I am, hooked at once. The book begins with Claire as a freshman in college; a parent has just visited. I share a passage on page 3:

“My mother worked hard to close the new distance, acting chipper, and I tried to fill the gap too, telling her about my classes and my roommate, Christine.  That night we ate dinner in an Italian restaurant in town. She ordered two glasses of wine, let me have one. Around the room two or three other students sat at tables with their parents, and for no real reason I felt embarrassed for all of us.”

This, then, is my community. I won’t always be “Book Pregnant,” but I hope to keep checking in with these amazing writers for a good long time to come.


Some of the members of Book Pregnant blog about our experiences as debut authors. See the posts at http://bookpregnant.blogspot.com/