The Wall Street Journal: "Hollywood's Gift to the Novel"

I was honored to be asked to write a WordCraft column for the Book Review section of the Wall Street Journal.

Readers want fiction to plunge them into a fully imagined world, one that not only enthralls but also convinces in its scale and defining details.


In my novel "The Chalice," I try to oblige by propelling the main character—Joanna Stafford, a former Dominican novice—through the Reformation-torn England of 1538. Readers learn about the sound of a rippling ship's sail, the look of a stand-alone wooden confessional, the feel of an aristocrat's cloth-of-silver gown. Atmospherics matter a lot: "A chalky white mist hung above the street, obscuring the buildings beyond the glazier's shop. It was as if a cloud had descended to earth. The stench of the shambles—the smell of rotting fish—encircled us."


Where did I learn to focus on the most vivid details of a scene? In screenwriting class. Screenplays are widely perceived as minimalist pieces of writing, bereft of the flair and texture of prose. But that's not true. A fine script includes complex characterization, flavorful dialogue and evocative action—all greatly distilled. It's boxed French cognac to a novelist's bottle of Merlot.


F. Scott Fitzgerald, William Faulkner and Dashiell Hammett infused their film scripts with novelistic craft. Now, as more and more writers churn out both scripts and novels, the influence goes the other way.


"Show, don't tell" is an admonition in fiction class but an imperative for screenwriters, who are limited to dialogue and action. And then there's pacing. Producers frown on screenplays of more than 120 pages, which forces a ruthlessness that many novelists would recoil from. Derek Haas, whose script credits include "3:10 to Yuma," is also the author of novels like "The Right Hand." His novelistic style, he says, owes a lot to screenwriting: "Keep it tight, keep those pages turning, delete the extraneous."


Novelists must choose between first-person and third-person point of view (unless they're Jay McInerney). In screenplays, first person doesn't even exist. Moreover, some of the most important movies of our time, such as "The Godfather" and "The Silence of the Lambs," take point of view to the extreme, leaping around in a series of tightly controlled crosscuts.


Such intercutting between scenes, settings and points of view is "something I've found effective, especially in creating tension" in fiction, says David Levien, co-screenwriter of "Ocean's Thirteen" and author of such acclaimed novels as "City of the Sun."


A screenwriter must make characters come alive quickly. Without the space to list age, height, weight and coloring, screenwriters aim for one original, defining detail. I found myself doing the same in my novels, even though I had plenty of room to play. My introduction of Jane Boleyn in "The Chalice": "Her skin was alabaster white; gleaming, yes, but devoid of any depth to its glow, like an egg kept overlong in a cupboard."


Every screenwriter pushes for a taut fusion of imagery and words. Consider this description from the playful action/exploitation film "Machete" (2010), co-written by Roberto and Álvaro Rodriguez:

"In poetry, you use words as images to evoke a feeling," Álvaro Rodriguez says. "Journalism teaches you a 'just the facts, ma'am' approach to writing. [Both] lend themselves to screenwriting. And then, much of that technique carries over into fiction."
—Ms. Bilyeau's second novel, "The Chalice," was published in March. She is the executive editor of DuJour magazine.

A version of this article appeared March 16, 2013, on page C12 in the U.S. edition of The Wall Street Journal, with the headline: Hollywood's Gifts to The Novel.

THE CHALICE IS ON SALE!


It's March 5th and my second novel, The Chalice, is now on sale in North America. It's an emotional time in my life, a culmination of my work to create this world for Joanna Stafford the rest of my characters. 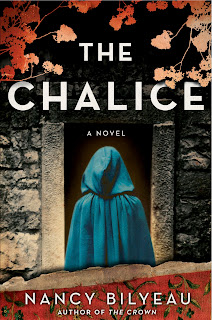 I am proud to present this review from the book blogger Luxury Reading!

"I have looked forward to Nancy Bilyeau’s The Chalice since I reviewed her debut novel, The Crown, a year ago. It has been well worth the wait; once again, Bilyeau’s words flow off of the page and into the imagination, drawing the reader in to the latest exploits of Joanna and company….
…With the concept of the titular chalice, Bilyeau puts another brilliant mystical spin on Tudor history and myth, this time addressing the most curious of Henry VIII’s marriages. Joanna, if she chooses of her own free will, has the opportunity to change the entire Tudor dynasty – and the future of the country and people she loves. With gripping prose and a touch of the fantastic, The Chalice is yet another masterpiece of historical fiction."

For the full review, go to: http://luxuryreading.com/thechalice/

Posted by Nancy Bilyeau at 5:30 AM No comments:


Pre-orders are critical to an author's viability. They help determine the amount of publisher support a writer gets, the size of the print run, and whether there is enough momentum to consider another book.

My friend Sophie Perinot, author of "Sister Queens," explains the importance of pre-orders in her post on "From the Write Angle: Not All Sales are Created Equal--What Your Writer Friends Wish You Knew But Are Too Polite to Tell You." 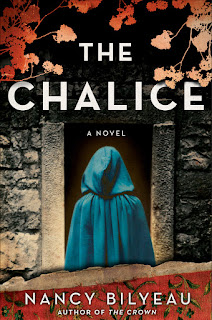 Today is the last day before the official North American release. I would love it if you could pre-order THE CHALICE. Amazon, Barnes&Noble, Indie Next, iTunes, Mysterious Bookshop. Doesn't matter which you choose.

Anyone who pre-orders, please send me an email at tudorscribe@gmail.com and I will pop a bookmark in the mail to you. Postage is on me. 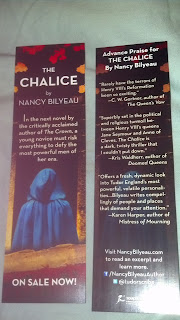 Posted by Nancy Bilyeau at 6:35 AM No comments: