This week a new review popped up in the blogosphere that was just wonderful.

One of the things I like best here is how The History Lady tells her followers how she came across my novel. Sometimes the bloggers receive my book for review from my publisher, sometimes it's won in a goodreads or contest giveaway. But occasionally they stumble across it themselves, and in this case I am so interested in how she learned about The Crown:

"Nancy Bilyeau's debut novel, The Crown leapt to the top of my reading list for purely selfish reasons.  I was writing about life in a 16th century priory in Poissy, France and stumbled upon a link between Poissy and Dartford Priory in Kent. Founded by royalty (Edward III) with nuns from Poissy in the 14th Century, Dartford Priory was a prestigious religious institution. I was curious to read an historical fiction account of life there—especially since I have not found an account of life at Poissy. I’m glad I did. The Crown is a thrilling read."

While I was researching The Crown, I read about the Dominican priories of Spain, France and Germany. It's not easy to learn about daily life in a medieval or early modern age convent! In England they were all "surrendered" to the king and then dismantled or demolished. But even in Europe, there just aren't many historical records. It became a challenge for me, to learn what I could about the sisters' lives.

The priory of Poissy no longer stands, just as the Dominican priory of Dartford is reduced to bits of stone wall. 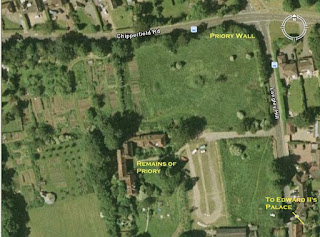 It's just so interesting, how we who love the past run across one another!

To read the full review go to: http://thehistorylady.wordpress.com/2012/10/17/wonderful-thrilling-debut-novel-the-crown-by-nancy-bilyeau/http://thehistorylady.wordpress.com/2012/10/17/wonderful-thrilling-debut-novel-the-crown-by-nancy-bilyeau/


Posted by Nancy Bilyeau at 8:08 AM No comments:

A Fun Interview with Anne Boleyn!

I really enjoyed my chat with the Queen Anne Boleyn Historical Writers! They are a lovely group. Happy to give away a book as part of the interview. 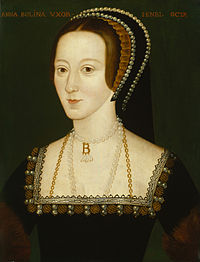 To read the interview go here:
http://queenanneboleyn.com/2012/10/10/interview-with-nancy-bilyeau-author-of-the-crown/
Posted by Nancy Bilyeau at 5:28 PM No comments:

Richard III and the Lost World of Greyfriars

For English Historical Fiction Authors, I wrote an article about the Franciscans who buried Richard III two days after Bosworth. I discovered some fascinating facts about the role of the friars in medieval society!

To read the article, go to:
http://englishhistoryauthors.blogspot.com/2012/09/richard-iii-and-lost-world-of-greyfriars.html
Posted by Nancy Bilyeau at 5:58 AM No comments: