What was the Life of a Medieval Nun? 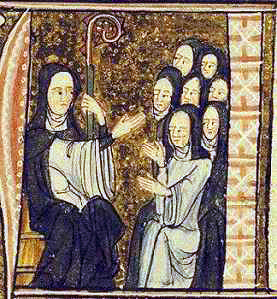 Anyone who writes historical fiction acts as a time traveler. What was life like for our characters? How much an author tries to enter the mind of a person who lived centuries ago depends on the author--and the subject. When it comes to lives of long ago, their thoughts and desires and expectations, some of the people seem like us, just wearing different clothes and eating different food.

But then there are the late-medieval Dominican nuns. And they are not much like us.

While researching the history of the Dartford Priory for my trilogy of mysteries, I found myself intrigued, awed, puzzled and impressed by the nuns who lived within the cloister walls. The sole nunnery for Dominican sisters opened its doors in 1372 and was demolished by order of Henry VIII in 1538. It was one of the twenty wealthiest priories in the kingdom, with nuns whose families came from the local gentry, the aristocracy and even royalty. Edward IV and Elizabeth Woodville's youngest daughter, Bridget, lived and died at Dartford. But while the priory owned a great deal of property, to provide for both the nuns and the friars at a nearby Dominican order, the women's existences were humble.

Their lives were ruled by custom--by religious doctrine set by the Dominican Order and adhered to meticulously. The sisters took vows of poverty, chastity, charity, and obedience. Dartford was an enclosed order, meaning the women could not leave. The doors were locked from the outside every night. They had chosen to live apart from the world.

Allow me to share just a few other aspects of what would have been expected of Sister Joanna, the protagonist of my series of historical mysteries.

They prayed more than you could possibly imagine

The Dominican sisters worshipped in their chapel up to eight hours a day.  That's right. Eight hours. Using the same liturgy as all of their order's friaries and priories, the women "sang the offices." The Divine Office extended the prayer of the Mass throughout the day. Also known as the Liturgy of the Hours, the Divine Office is a “sacrifice of praise” in hymns, psalms, and canticles.

The Dominican habit they all wore was a white tunic and scapular, a leather belt, a black mantle, and a black veil. The habit was made of unfinished wool, expressing the penance, purity, and poverty of the order. Women and men could only wear linen by special permission. In 1474, Prioress Beatrice Eland petitioned to be allowed to wear linen instead of unfinished wool because she was debilitatem et antiquitatem (elderly and debilitated). She was granted a special license to do so.

They slept and ate very little. And it was cold.

In a modern-day Dominican nunnery, the sisters usually gather for Lauds (morning prayer), Vespers (evening prayer), and Compline (night prayer). But in the early 16th century, at Dartford Priory, the sisters would have followed the custom of the full monastic schedule.

Whenever the bell rang, the 16th century sisters had to rise from sleep or work and proceed to where they'd sing the offices.  Matins and Lauds opened the day at midnight in the summer and at 2 am in the winter. The next time for prayer was dawn: Prime. Some members remained in the chapel between Matins and Prime. Which meant the only sleep they obtained was between the end of Compline, the night prayer, and Matins, at midnight, perhaps three hours total.

As for meals, the word often used is "meager." They practiced perpetual abstinence from meat. There were two meals a day in the summer and one meal a day in the winter. On Fridays at the very least--perhaps three days a week--they fasted, consuming only bread and water. All meals were consumed in silence.

Obviously, there was no central heating in a Tudor-age abbey or priory. Often the buildings had a large cloister garden in the center, where medicinal herbs where grown, and open passageways extended from the quadrangle into the main building. This meant in the winter they moved around in the open air routinely, wearing only their habits. Did most rooms have fireplaces? Nope. Besides the kitchen, often there was one room set aside in the entire abbey or priory with a fire lit, called the Calefactory, or warming room.

To us, this all may seem hard to fathom. More like prison than a religious house. But their daily lives should be compared not to ours but to those of people who lived outside of the priory walls. And life was rough in the 16th century, especially for women. Many found profound fulfillment in their enclosed orders.

After the prioress was forced to "surrender" the priory to Henry VIII and the buildings were demolished, some of the sisters lived together in small groups, attempting to continue their spiritual community. When Mary I came to the throne, she attempted to return the kingdom to the Catholic faith. Dartford was one of two women's religious houses chosen for restoration. Fifteen years had passed, yet more than eight nuns joyfully returned to Dartford, to resume the way of life I've described above and follow to the letter each detail of their spiritual customs.

As Catherine of Siena, a 14th century Dominican saint, wrote, "There is nothing we can desire or want that we do not find in God."

To learn more about the real-life women of Dartford Priory, go here.

My Love of Atmosphere

It always makes my day when a reviewer, whether it's a professional book critic or a reader sharing thoughts on amazon and goodreads, remarks on my love of creating atmosphere in my books. I do aim to immerse readers in the sights, sounds and smells of Tudor England. I almost feel like the mistress of a time-travel machine. The next stop is 1540. :) 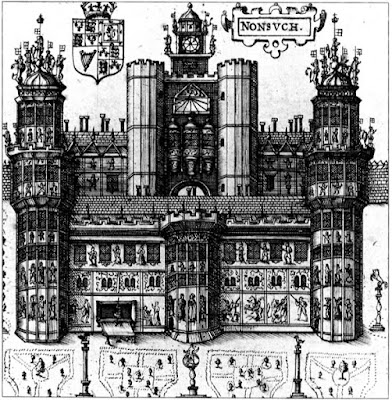 
For the rest of the review, go here.


Posted by Nancy Bilyeau at 8:30 AM No comments: