I didn't know much about Jackie Kennedy's career as a book editor, but in a vague way assumed that she was no more than a dilettante in publishing. After stumbling on a book about her life early this year, I read an intriguing chapter about how much she put into being a book editor. She acquired nearly 100 books over a long and steady career. As a lifelong editor myself, newspapers and magazines, I wanted to know more.

I pitched a story on her book career to Town & Country, a regular home for my work, and they gave me the greenlight. I researched the First Lady's life in this period very thoroughly, sticking to her professional life and not diving into the gossip. I came away from it with respect for Jackie.

The eventual story seems to have pleased my own editor at Town & Country, and I'm happy to share it here:

With little experience in the publishing world, she went from being First Lady to making just $200 a week

Early one September morning in 1975, a 46-year-old woman busied herself preparing to go in for the first day of a brand-new job. She boiled an egg, saw her teenage son out the door to Collegiate School, donned a conservative gray shirt dress, and caught a taxi outside her 1040 Fifth Avenue apartment for midtown Manhattan.


When that cab pulled up outside 625 Madison Avenue, it looked like a riot was erupting. Every reporter and photographer in town was jostling for advantage outside the office building’s entrance, joined by a crowd for whom curiosity had edged into fixation. The woman calmly got out of the taxi and made her way into the building, which housed the New York editorial office of Viking Press.


Jacqueline Kennedy Onassis was reporting for her first day of paying work since 1953, when she was an unmarried “inquiring camera girl” for the Washington Times-Herald...

I write thrillers and I have a part-time job as the deputy editor of The Crime Report, a website of the Center for Media, Crime and Justice at John Jay College, so I guess you could say crime is already my "thing."

As the U.S. editor for the website The Vintage News, I edit a wide variety of stories, from the Golden Age of Hollywood to the wonder of flapper shoes to crimes of the past. I've edited stories on Lizzie Borden and Victorian poisoners. For today, I wrote a story set in my city, NYC, and a famous mafia hit: the shooting of "Big Paul" Castellano outside Sparks Steak House 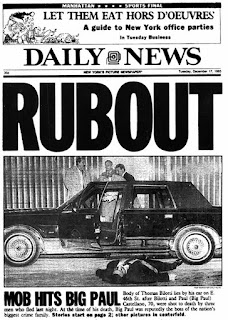 New York City is famous for its steakhouses, and since opening its doors at 201 East 46th Street in 1977, Sparks has been a carnivore crowd favorite. The essential components of a steakhouse are as follows: tables covered nearly to the floor with spotless tablecloths, set in dark, wood-paneled rooms; middle-aged men serving as waiters, their flawless manners stopping short of obsequiousness and their Brooklyn, Bronx, or Queens accents proudly on display; really good booze, like a Macallan single-malt whisky or a $100 bottle of Bordeaux; and of course the food itself: large, succulent meat portions, accompanied by baked potato heaped with butter, chives, and sour cream.

Since steakhouses haven’t changed much since their Mad Men heyday, you can assume that specific entrées found on a Sparks menu today—prime sirloin, filet mignon, and sliced steak with bordelaise sauce—were also on the menu in the 1980s.

It was the prospect of a dinner plate graced by the third cut of a prime rib of beef that drew a 70-year-old man named Paul Castellano to Sparks on the evening of December 16, 1985.

“Big Paul” Castellano was highly knowledgeable about meat, and not just because his father was a Brooklyn butcher. Since his friend, cousin, and brother-in-law Carlo “the Godfather” Gambino died of a heart attack in 1976, Castellano had been the boss of the Gambino family, considered the most powerful of the five families of the New York City mafia and worth an estimated $500 million a year. Aside from the usual racketeering, extortion, loansharking and control of certain unions, the Gambino group had a stranglehold on the concrete business and the supply of poultry and meat to much of the city.

To read the rest of the story, go here.
Posted by Nancy Bilyeau at 7:00 AM 1 comment:

Celebrating the Danish publication of my 3rd novel

The foreign sales of my books mean a great deal to me. I love to think of people reading my work in other countries. One of my favorite publishers is Forlaget Punktum, in Denmark.

I received a box in the mail yesterday containing the Danish version of my book. The title they chose is a translation of "The Forbidden Covenant."

Interestingly, my title for the book was "The Covenant," but my American publisher changed it because they had a book of the same title a couple of years ago. 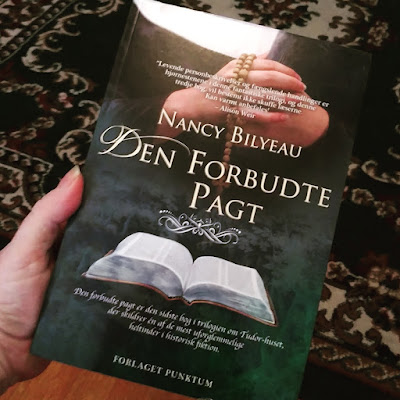 Posted by Nancy Bilyeau at 8:48 AM No comments: