The Mysteries of Whitby Abbey

I have a passion for abbey ruins. Part of the reason is that I wrote a thriller trilogy set during the Dissolution of the Monasteries, and through my research I've discovered fascinating things about the world inhabited by my protagonist, a Dominican novice, in Dartford. But every ruin has a story to tell, and few are as enthralling as Whitby, in north Yorkshire. 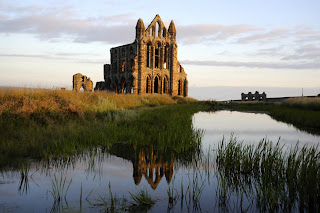 THE FOUNDING: The first religious establishment on the site sprang up during Christianity's infancy in Britain. The founding abbess was Hilda (or Hild), a princess born in 614. She was the great-niece of King Edwin of Northumbria. After her father was poisoned in a court plot, she was brought up in the royal family, baptized by Paulinus, a  Roman missionary.

Inspired by her sister, who became a nun, Hilda chose a religious life and became an abbess. When she was about 40, Hilda became the abbess at Streoneshalh, named after a Roman tower (later known as Whitby). She created a double monastery of Celtic monks and nuns, who studied the scriptures and performed good works. Her wisdom was so respected that the first synod of 664 was held there.

It is said that given a choice between Celtic religious laws and those of Rome, the majority voted for Rome at the synod. The Celtic influence--and the female leadership--faded at Whitby and at other monasteries in the early medieval age.

Hilda died on November 17, 680. She was made a saint and her relics were transferred to Glastonbury by a king.

For centuries, visitors have sworn that they see Hilda when they visit the abbey. Lionel Charlton, in his 1779 History of Whitby, writes:


"At a particular time of the year, in the summer months, at ten or eleven in the forenoon, the sunbeams fall in the inside of the northern part of the choir; and 'tis then that the spectators who stand on the west side of Whitby churchyard, so as just to see the most northerly part of the abbey, imagine that they perceive in one of the highest windows there the resemblance of a woman, arrayed in a shroud. Though we are certain that it is only a reflection caused by the splendor of the sun's beams, yet it is commonly believed to be an appearance of Lady Hilda, in her shroud."

More happily it is said that when sea birds fly by the abbey, they dip their wings in honor of St. Hilda.

THE ORDER:  Hilda's monastery did not last--Viking raids in the late 9th century wiped out the monks and destroyed the structure. For 200 years the place by the sea was desolate. 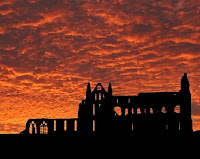 A soldier serving William the Conqueror named Reinfrid became a monk and discovered the crumbling monastery. William de Percy, the first of the illustrious Northern noble family, gave Reinfrid the land and enough money to create a Benedictine order of monks.

This house of monks thrived for almost 500 years. This was when the large buildings, church and cloister and library and so forth, were raised, the ruins of which can be seen today.

That way of life came to an end when Henry VIII broke with Rome and destroyed the monasteries. Whitby was surrendered to the will of the king by its abbott on December 14th, 1539, one of the last of the large abbeys to fall. Stripped of its valuables and abandoned, its annual value was estimated in the Valor Ecclesiasticus at £437 2s. 9d.

THE INSPIRATION: Sir Walter Scott in one of his early epic poems, Marmion, tells a romantic story that lends a lingering eeriness to Whitby. With more than his usual looseness with the facts, Scott conflated St. Hilda and the Benedictine monastery with the Celtic-tinged magic of the Isle of Lindisfarne, in a plot that is ostensibly about the battle of Flodden in 1513 but actually revolves around a lustful English lord.

Lord Marmion has a secret mistress at the "Abbey of St. Hilda", a "dishonest" nun named Constance living at "high Whitby's cloistered pile." After her lover abandons her, for her "broken vows" and "sordid soul," Constance is walled alive at the abbey:


"Yet well the luckless wretch might shriek, well might her paleness terror speak! For there were seen, in that dark wall, Two niches, narrow, deep, and tall; Who enters at such grisly door shall ne'er, I ween, find exit more...Two haggard monks stood motionless; Who, in holding high a blazing torch, Showed the grim entrance of the porch: Reflecting back the smoky beam, The dark-red walls and arches gleam. Hewn stones and cement were displayed, And building tools in order laid."

But Whitby was to find its greatest fame nearly a century later.

An Irish author and theatrical manager named Bram Stoker decided to set part of his 1897 novel, Dracula, in Whitby. Stoker, who had spent several holidays at the coastal town of Whitby, makes vivid atmospheric use of the abbey ruins, the churchyard, the many steps leading up to it as well as the train station and lighthouses.

In a key section of the book, the Demeter, a ship that had set sail from the Bulgarian port of Varna, drifted into the harbor of Whitby after a ferocious storm. "A strange schooner" it was, wrote Mina in her journal, "and lashed to the helm was a corpse, with a drooping head which swung horribly to and from with each motion of the ship. No other form could be seen on deck at all." No other crew were found in the boat, just its cargo: "a number of great wooden boxes filled with mould."

The next day, Mina writes:


"Early this morning a large dog, a half-bred mastiff belonging to a coal merchant close to Tate Hill Pier, was found dead in the roadway opposite its master's yard. It had been fighting and manifestly had had a savage opponent, for its throat was torn away, and its belly was slit open as if with a savage claw."


Of course, that was only the beginning...

THE PRESERVATION: During World War I, the abbey was damaged again. This time it was two German battlecruisers aiming for a signal post. They blasted away at the abbey for 10 minutes.

Whitby is now in the care of English Heritage, available for visits most of the year. To learn more, go here. 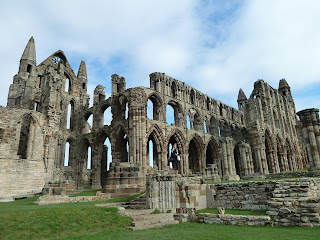 Nancy Bilyeau is the author of a trilogy of Tudor suspense novels, on sale in North America, the United Kingdom, Germany, Spain, Russia and the Netherlands. The last book in the trilogy, The Tapestry, was the runner-up for the Daphne du Maurier Award 2016 for Best Historical Romantic Suspense.

Nancy's other historical novels include The Blue, a thriller set in the porcelain world of the 18th century.

I'm excited to share that I will be writing for Town and Country, a wonderful magazine with a long, rich history. My focus will be Society Scandals of the past. I launched this with a story on the Gloria Vanderbilt custody case, which began on Oct. 1, 1934.. 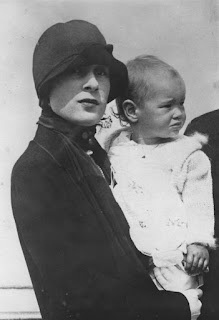 Inside the Custody Battle for 10-Year-Old Gloria Vanderbilt

The gray Rolls Royce eased to a stop at the curb of 60 Centre Street in downtown Manhattan. Out stepped Gertrude Vanderbilt Whitney, thin and unsmiling. Dressed in a fox fur, hat, and gloves, the 59-year-old founder of the Whitney Museum, accompanied by her lawyer Frank Crocker, silently headed up the 32 steps leading to the Corinthian-columned Supreme Court of the State of New York. Every inch of the way, she was swarmed by nearly 100 jostling newspaper reporters and photographers.


October 1, 1934: the opening court date of The Matter of Vanderbilt. A family dispute over who should have guardianship of a shy and sickly 10-year-old heiress, Gloria Vanderbilt, had escalated into a “trial of the century,” complete with media circus. The opposing parties were two sisters-in-law: Gertrude Whitney and the child’s 29-year-old mother, also named Gloria. The next six weeks would treat reporters to charges of maternal neglect, greed, and “immorality” that ranged from drinking cocktails till dawn to leafing through a book of pornography with a prince of Hohenlohe-Langenburg while wearing silk pajamas.  And then there was the kissing and cuddling with female friends.


The Vanderbilt case was a pop-up into the lives of the ultra-rich for Depression-stricken America. Of all the principals involved in a “trial of the century —and there have been, truth be told, a string of them—no one was more horrified by the accompanying publicity than the deeply private Gertrude Vanderbilt Whitney. Her life was the 1934 equivalent of clickbait. ...