Henry VIII, Anne Boleyn and the Lost Palace of Whitehall

At about 4 p.m. on January 4, 1698, during the reign of King William III, a fire broke out in the Palace of Whitehall. The possible cause was linen left to dry by a fireplace. The "devouring flame," in the words of James Vernon, destroyed the king's and queen's lodgings and most of the rest of the sprawling complex. "Except the banqueting house and the great gate, all is burnt down or blown up." The scene was chaotic, with court officials desperately trying to retrieve their possessions as the "gates were locked up to prevent the mob coming in."


This was the end of Whitehall as a royal residence, the palace where Henry VIII and Charles II died, where Elizabeth I entertained the French prince come to court her, where The Tempest was first staged for James I, where Hans Holbein designed a gatehouse and Inigo Jones a banqueting house, where Charles I was beheaded. Years after the fire, Queen Anne, the last Stuart monarch, said she wanted to rebuild Whitehall, but it came to nothing.

Today little remains above ground of the royal residence that covered 23 acres in Westminster, on the edge of London. The name "Whitehall" is synonymous with the British government and its civil service. Yet present-day Downing Street once was part of Henry VIII's royal entertainment grounds, with the street's first known house leased by Elizabeth I to a favorite, Sir Thomas Knyvet. The Tudor roots are strong.

Not everyone mourned the palace's destruction in the late 17th century. The duc de Saint-Simon said in his memoirs "a fire destroyed Whitehall, the largest and ugliest palace in Europe."

But Whitehall, the obsession of royal lovers Henry VIII and Anne Boleyn, had once been thought beautiful.

It was Cardinal Thomas Wolsey, Henry VIII's lord chancellor, who turned a bishop's residence on the Thames, just a short distance from Westminster Abbey, into a place of splendor. Since Wolsey held the bishopric of York, he was entitled to make use of York Place, as it had been known since the 13th century. Wolsey borrowed money and devoted his considerable energies to expanding it "most sumptuously and gorgeously." Banquets were held there, and elaborate "masques and mummeries."


On March 1st, 1522, Cardinal Wolsey looked on as an elaborate entertainment was performed at York Place after supper. A "Chateau Vert" was raised, with the King and his friends masqued to storm the castle, occupied by costumed ladies, including a young brunette named Anne Boleyn, who was named "Perseverance" and had "black and beautiful eyes."


Five years later, Henry VIII made public his quest to divorce his longtime wife, Catherine of Aragon, and marry Anne Boleyn. It was a struggle with momentous consequences, among them the downfall of Cardinal Wolsey, whom, the king felt, didn't work hard enough to win his master the annulment.

On Oct. 19, 1529, Wolsey was deprived of the great seal and he threw himself on the king's mercy. Hampton Court, York Place--the palaces became Henry's. A week later, Henry VIII arrived at York Place for a royal walk through, accompanied by Anne Boleyn, her mother Elizabeth, and the courtier Henry Norris. (Norris would be executed for adultery with Queen Anne in 1536, but that's another story.) The king found "the present more valuable even than he expected." No one gave a thought to Cardinal Wolsey, who would the following year die, arrested and alone, on his way to the Tower of London.

Turning York Place into a palace fit for a king and his future queen was no simple matter. Wolsey's residence revolved around a great hall, privy chamber and a receiving room, a cloister and a chapel, and kitchens; there were no lodgings for the vast number of people who lived in a Tudor royal residence. No tiltyard for jousting or ornamental garden. On one side was the Thames. On the other was a large marsh that once contained a leper hospital. Not a lot of room for expansion.

Yet expand it did.

During the same tumultuous years that Henry VIII fought for his annulment, breaking with the Pope and alienating those still loyal to Queen Catherine and her daughter the Princess Mary, he was personally directing the legal procedure of seizing the surrounding land for the new Whitehall. He inspected each building plan before it went forward. Anne Boleyn was as involved as the king in overseeing the design of the new palace, taking tremendous interest in its architecture as well as the stylish details. Anne possessed the sort of sophisticated taste that came from serving the French queen as a teenager. She and Henry shared a fondness for French and Italian decor. Anne liked "antique" touches, such as classical columns and ceilings and patterned grotesque work.

The Spanish ambassador Eustace Chapuys wrote that the king concentrated on Whitehall "to please the lady who prefers that place for the king's residence to any other." Perhaps planning their new home was an escape from stress for the embattled couple. 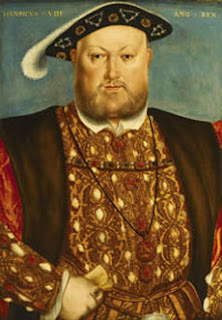 Henry VIII ordered his people to survey the surrounding property, purchase the leases and then demolish buildings. This caused "great discomfort" to those who still lived in Westminster, but the king wasn't concerned. At one point, the up-and-coming Thomas Cromwell drew up a list of the leases. When Cromwell accompanied Henry and Anne to France to meet the French king, an official left behind wrote a reassuring letter that "there is as much speed as can be made there."

Whitehall had to be everyone's priority!

In his detailed book, Whitehall Palace: An Architectural History of the Royal Apartments, 1240 to 1699, Simon Thurley wrote about the astonishing lengths taken to build a wall along the river.


The whole area was low lying and prone to flooding from high tides...In July 1531 a pump was installed in the foundations at Lamb Alley and leather buckets were also in use to bail out the waterlogged trenches. To keep the works dry torches were provided so the pumpers and diggers could work through the night, and in reward forty barrels of beer, forty dozen loaves and four whole cheeses were distributed to the workers.


Sheriffs, bailiffs and constables were informed that at absolutely any time the king's representatives could seize workmen for the "speedy furnishing and building of our new manor." Anyone who refused to relinquish bricks and other materials was subject to arrest.

New galleries and chambers were built, extensive gardens, jousting and tennis yards, a bowling green, cock-fighting pit and, of course, the magnificent Holbein gatehouse, with its checkered pattern and fleur de lis. Historians believe that on the upper floor of this gatehouse, in January 1533, Henry and Anne married in secret. Now she would reside in the palace as the king's wife.

Expansions and renovations Whitehall continued for much of Henry VIII's life. But Anne Boleyn never saw the completion of their cherished plans, since she was beheaded three years after their wedding. Some have speculated that the king did not reside in Whitehall as much after her death out of a sense of guilt, and he seems to have gone to great lengths to obliterate her memory there. But he definitely was at Whitehall at important moments: Henry VIII married Anne's successor, Jane Seymour, in the Whitehall chapel. The famous mural of the king and his family painted by Holbein shows Jane at his side, displayed in the privy chamber of Whitehall. And Henry seems to have deliberately chosen Whitehall as the place where he wanted to die.


Today it's nearly impossible for us to inhabit--to imagine--the dazzling Whitehall palace that Henry VIII was so obsessed with. The Banqueting House that survived the fire was built by the Stuarts, after all. But there is one 16th century room that remains. Underneath the Ministry of Defence is a preserved chamber referred to as Henry VIII's Wine Cellar. It may be named for the Tudor monarch, but the stone-ribbed, brick-vaulted chamber was built by Wolsey.

In that, the cardinal had the last word.

Nancy Bilyeau is the author of the historical mystery trilogy The Crown, The Chalice and The Tapestry, published by Simon & Schuster and available in North America, the United Kingdom and Germany. The Crown was an Oprah magazine pick. Much of the third novel, The Tapestry, takes place in the palace of Whitehall in 1540. The Tapestry was a finalist for the Daphne du Maurier Award for Best Historical Suspense.
Amazon

Posted by Nancy Bilyeau at 8:27 AM