The Truth About Elizabeth of York 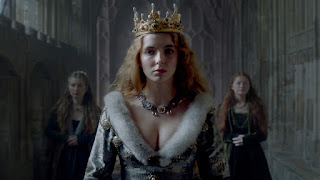 There's an interesting interplay going on between this series and Game of Thrones. The marriage of Elizabeth of York and Henry Tudor ended the Wars of the Roses, the long, bloody medieval conflict that many believe George R. R. Martin used as his basis for the fantasy series. Now, with "The White Princess," you can see the influence of Game of Thrones. Not just with casting: Michelle Fairley, the beloved Catelyn Stark, plays Henry's mother, Margaret Beaufort. But even the visuals of the shows evoke Game of Thrones, as you can see here:


Read my story for Town & Country on Elizabeth of York here.

Posted by Nancy Bilyeau at 1:04 PM

Email ThisBlogThis!Share to TwitterShare to FacebookShare to Pinterest
Labels: Elizabeth of York, The White Princess