Solving the Mysteries in the Vatican Secret Archives

As the U.S. editor of The Vintage News, I edit stories and write them. It's rewarding to see the reach of the history-news website--there are as many as 6 million readers a month!

A favorite story of mine is a feature I wrote on a scientific breakthrough in medieval manuscripts.

The appearance of purple dots on manuscripts written in the Middle Ages has long been a frustrating problem. The dots grow and grow until they obscure the writing on a scroll or book page, making it impossible for us to read the words today. Keeping the manuscripts in a controlled environment, such as the air-conditioned, low-light sanctum of the Vatican Secret Archives, can only do so much. The spread of the purple dots has destroyed documents that historians are desperate to learn from. 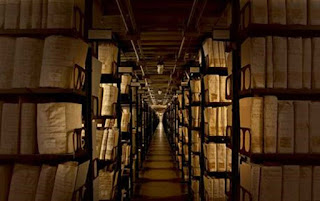 But this year a team of researchers led by an eco-toxicologist at the University of Rome Tor Vergata–using as their sample a 16-foot-long, 1244 parchment roll asking that a man named Laurentius Loricatus be made a saint–discovered what created the purple dots. It was salt-loving marine microbes, according to a paper released September 7 in the journal Scientific Reports.

At first, the results just didn’t seem right. “When my students came to me, saying, ‘Luciana, we found marine bacteria,’ I told them, ‘Repeat, please; there is a mistake. There must be a mistake,’ ” Dr. Luciana Migliore told Live Science.

To read the rest of the story, go here.
Posted by Nancy Bilyeau at 12:40 PM