The Big Ideas Behind "Small Hours" 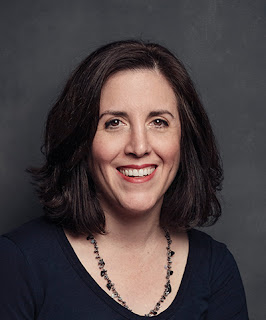 There are some books you open at Page One and the next time you look up, hours and perhaps days have passed and you just made it to the end. It's impossible to tear yourself away. Jennifer Kitses' Small Hours is an engrossing novel of a single day in the life of a young couple whose suburban life is far less perfect than it seems. Over the course of a single day, the viewpoint swings back and forth between Helen Nichols, a graphic designer working at home while taking care of young twins, and Tom Foster, the commuter in the family who is hanging on to his job as a financial editor by a thread. Money problems and the stress of parenting are taking a toll on Helen and Tom, issues that I could completely relate to--and I'm sure I'm not alone. As their lives unravel, the tensions and secrets between the two come to a full boil. I found myself reading the book while holding my breath!
I caught up with Jennifer Kitses to ask her some questions about this, her debut novel.

Has your life ever changed this substantially in a single day?

I’m not sure if my life has ever changed significantly in one day. (If so, I’ve erased that from my memory!) But I’ve had many days, particularly when my twin daughters were very little, when I experienced so much in one day: maybe there’s a major problem at work (the kind that can cost you a job), and then something crazy happens at the park, and then suddenly a child is very sick and needs to go to the emergency room, and meanwhile everyone in the family is sleep-deprived and making one terrible decision after another. I’ve had that day many times, only to get up the next morning and start the process all over again. I think there’s definitely a kid-factor at play here, but these types of days can happen to anyone. One you’ve made one terrible decision or had a moment of bad luck, more seem to follow ¾ it’s like there’s a law of compounding errors

Do you think of this story as one about a strong marriage being tested by a devastated economy (and specifically the downturn and collapse of the media) or is it primarily about the issues the couple have deep down and they would manifest no matter how their careers fared?

Tom and Helen face a number of crises over the course of one day, and I think they would be forced to confront some of their problems--particularly the ones that arise in Tom’s storyline--no matter what they were experiencing financially. However, Helen’s story is very closely tied to changes in the economy, and to her position in it. She is watching her family slide down the economic ladder. She’s very aware of how job losses and downsizing have hurt her family, and how the financial decisions and mistakes that she and Tom have made are now affecting their well-being.

The year isn’t specified in the novel, but the 2008 financial crisis was very much on my mind as I was writing it: Tom and Helen bought their house at the height of the market, and then they were hit by the collapse of the media industry and the economic downturn. But I also feel that the middle class has been struggling for a long time, and that was something I wanted to weave into the story. There’s a large section of the middle class (increasing all the time, it seems to me) that is barely scraping by, and the downsizing of a job or even an unexpected medical bill can be devastating. 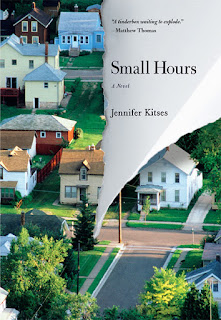 Would you say that trust is a theme of the novel?

Trust is one of those themes that sort of worked its way in, without my realizing it at the time. I think both Tom and Helen would say that they trust each other completely. Yet at the same time, neither is being completely truthful, or trustworthy. They both have trouble with self-perception. I’ve always been fascinated with the difference between how we see ourselves and who we really are, and that runs through the story. (Personally, I think most people are still deserving of trust, even after terrible errors of judgment.)

Is the upstate New York town based on a real place? It felt incredibly real.

Devon is based partly on Beacon, New York, although the real Beacon is faring a lot better than my imaginary town. I also brought in aspects of Maynard, Massachusetts--another former mill town that I love.

Doing the research about the setting was one of my favorite parts of working on this book. I loved taking the train to Beacon on weekdays, and seeing what it felt like when so many people were off at their jobs in the city. I’ve often imagined leaving the city for various Hudson Valley towns, and it was great to have an excuse to explore. 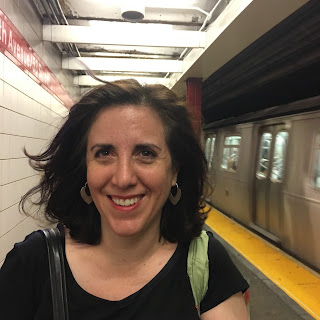 How about the jobs that the husband and wife have? That too felt very authentic. Did you need to do research being a graphic artist or a financial editor?

After putting aside an earlier novel that required endless research, I decided to make things a little easier for myself with this story. So I borrowed a lot from my personal experience. I was a reporter at a financial newswire (Bloomberg News) for about four years, and I’ve also worked at magazines, so I was able to draw on those settings for Tom’s workplace. Helen’s job is based on my husband’s work in graphic design. He read all of those sections very carefully, many times, and even helped me vet product names for nutritional supplements (which play a role in Helen’s job). There are so many crazy supplements out there--it was hard to come up with names that aren’t actual products!

Did you consider telling the story from one character’s point of view initially and then it became the back and forth?

I planned on the alternating points-of-view from the start, and I was so happy to find a structure that worked. It made sense, because I wanted to tell each of their stories. Also, I was interested in how Tom and Helen each have their own, full life (at home and at work, with and without their kids, on the subway and at the playground), and yet they come together at the beginning and end of their days, and connect at various times. Each is a strong presence in the other’s life, but they live in their own worlds.

Which writers have most influenced you in how you approached this novel?

There was definitely a Tom Perrotta influence; I’m a huge fan of Little Children and Election, which have shifting points-of-view and a lot of momentum. But crime novels have also been a major influence, because I’m drawn to stories with tension and suspense. Current favorites are Richard Price and Kate Atkinson, for her Jackson Brodie series. Sometimes I’m very influenced by a single book by a writer; I love the sense of place in The Fortress of Solitude by Jonathan Lethem.

What is your next book?

I’m very excited about the story I’m working on now, but it’s still in early stages. I’m guessing it will change a lot over the next few drafts. I wish I knew a better--or faster!--way, but at this point the details are still falling into place.

Jennifer Kitses is the author of the novel Small Hours. She received an MLitt in creative writing from the University of St. Andrews in Scotland, and has worked for Bloomberg News, Condé Nast Portfolio, and Columbia Business School. Her fiction has appeared in Akashic Books' online series, Mondays Are Murder. She lives with her family in New York. You can follow her on Twitter at
Posted by Nancy Bilyeau at 9:07 PM