Interview with Alison Weir on "Queens of the Conquest: England's Medieval Queens"

Alison Weir's new book of nonfiction, Queens of the Conquest: England's Medieval Queens, is nothing short of sensational. I've been a steady reader of Alison's since I devoured The Six Wives of Henry VIII, and while she has written essential books on the Tudors, I love it when she writes about people who lived even earlier, from The Princes in the Tower to The Mistress of the Monarchy: The Life of Kathryn Swynford, Duchess of Lancaster.

Alison has traveled even further back in time to write Queens of the Conquest. I knew little about Matilda of Flanders, wife of William the Conqueror; Matilda of Scotland, wife of Henry I; Adeliza of Louvain, the second wife of Henry I; Mathilda of Boulogne, wife of King Stephen; and Empress Maud, England's first female ruler. Now, thanks to this meticulously researched and engrossing book, I feel as if they are flesh-and-blood, very distinct women. 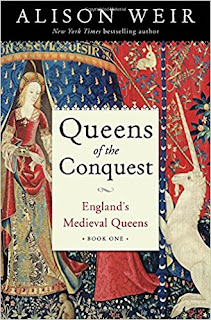 I had to know more about how she pulled this off, and I reached out to Alison with some questions, which she graciously answered for me amid her book tour.


You wrote an excellent biography of Eleanor of Aquitaine, "Queens of the Conquest," which ends with the reign of Eleanor and her husband, Henry II. When you were writing about Eleanor, did you think of taking a closer look at the earlier queens someday or did the idea come much more recently?

Alison Weir: Back in the 1970s, having written the original version of my book The Six Wives of Henry VIII, I researched all the medieval queens of England, with a view--somewhat ambitious, perhaps!--to becoming the new Agnes Strickland! In 1991, when The Six Wives of Henry VIII was finally published, a reader wrote urging me to write about Eleanor of Aquitaine. I got out the research and realised I had enough for a biography, but it took me years to persuade my publishers to commission it. I have long wanted to publish my research on the other medieval queens--some of it has appeared in my biographies of Isabella of France and Elizabeth of York, and in my books on the Wars of the Roses--and I'm delighted to have been commissioned to write four books on the subject. I need that scope to do it properly. It was originally going to be one book, but you can't do justice to the subject in a single volume.


I was thrilled by how much you were able to relay about the queens' lives in order to tell their stories, there was a wealth of rich detail. I was under the impression that there wasn't a great deal of original material on these women, and yet it's possible that that is a false assumption of mine? Is there more in contemporary documents about these queens than is commonly understood?


AW: The sources are patchy. There's very little on Adeliza of Louvain, for example, and a lot on the Empress Matilda. In places, I found I was trying to weave fragments of information into a cohesive text; and in others I was able to write a sweeping narrative. Fortunately, there are excellent chronicles for the period, and a surprising number of letters written by the queens.


The life of Matilda of Flanders, the wife of William the Conqueror, was fascinating. She was quite strong--do you think another common assumption is that these queens were submissive and very much in their husband's shadow?


AW: Yes, I do. I was startled to find that the Norman queens were regarded as 'sharers in the royal dominion', and almost as queens regnant. They exercised real power, compared to later queens. I am fascinated by the development of English queenship, and that is an over-arching theme in the book.


I found the life of Matilda of Scotland very moving. The political situation was such that she had to hide in a convent for protection, but that really haunted her during her whole life--that she was a nun who broke her vows to marry, which was just not true. Were you sympathetic to her?

AW: I admire her as another tough lady of integrity who knew her own mind and had great abilities - more than we are aware of. I think posterity was unfair to her.


Is there any queen of England more complex that Maud?


AW: Anne Boleyn? It's tempting to regard Maud from a modern, feminist perspective and take a more sympathetic view, but she lost the throne because of her appalling lack of political judgement. No one complained that a woman had no right to rule - you will search in vain for evidence that they did - and at one point Maud carried almost the whole kingdom with her. If she had shown herself conciliatory and bountiful, her arrogance would have been forgiven.


Do you think King Henry I was a pleasant husband for either of his wives? Or was he pretty much what most wives would have to deal with in that century?


AW: He was considerate towards them, and did not demur when Matilda of Scotland decided she wanted no more children. Certainly he relied on her to rule as regent while he was abroad, which argues a high degree of respect for her. And he was careful not to blame Adeliza of Louvain for her failure to bear him an heir, and even sensitive to her embarrassment and sense of failure when he had publicly to make alternative plans for the succession. But he was serially unfaithful to both wives, although there is no record of either of them complaining, and they accepted the presence of his bastards at court. They must have been aware that he could be cruel and ruthless, but he never displayed such behaviour towards them.

I wanted to switch to your novel of Anne Boleyn, which was extremely interesting as well. Do you think the key to understanding her is that she never loved Henry VIII or even found him physically attractive?


AW: Thank you! Yes, I think her story makes more sense if you go with George Wyatt's statement that ‘she imagined that there was less freedom in her union with her lord and King than with one more agreeable to her’, which suggests that Henry the man was not particularly agreeable to her. But she was the product of an ambitious family, and it is likely that the prospect of becoming queen outweighed all other considerations.


Can you tell us anything about your perspective on Jane Seymour, the book that is next in that series of the novels of the wives of Henry VIII?


AW: I can only say that the novel is built on exciting new research! Jane is an enigma. Historians endlessly debate whether or not she was the demure and virtuous willing instrument of an ambitious family and an ardent and powerful king; or whether she was as ambitious as her relations and played a pro-active part in bringing down the Queen whom she served. I hope I've offered a credible reading of her. I found some interesting evidence about her obstetric history. But the most startling development was in regard to her death. Traditionally, it has been assumed that Jane died from puerperal fever, yet when I studied the sources for her final illness, and looked at the chronology, an anomaly emerged. I got a team of medical experts on the case, and they all said the same thing. But it's under wraps until the book comes out!
Posted by Nancy Bilyeau at 3:43 PM