I've always been fascinated by Steven McQueen--and I feel it's safe to say I'm not alone--but when I researched this story on him for The Vintage News, I learned about his ambition, his competitiveness, his troubled childhood, and his talent. 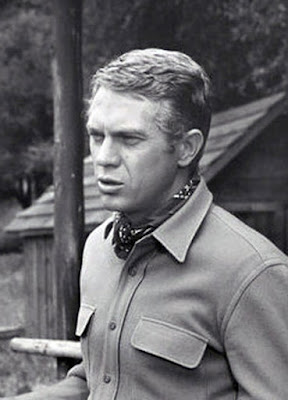 Steven McQueen, the Icon Who Started Out As a Scene Stealer

Ever since his death in 1980s at the age of 50, Steve McQueen’s reputation as the King of Cool has grown and grown. Black-and-white photos of McQueen’s lean, weather-beaten face squinting into the sun compete with vivid color images of him straddling a motorcycle or climbing out of a race car, his eyes startling blue. Then there are the photos of McQueen with his arm around his second wife, Ali Macgraw, the patrician brunette beauty fresh off Love Story who he stole from her Hollywood husband, Robert Evans, while she was his co-star in The Getaway.
An essential aspect of a cool persona is a temperament that is laid-back and confident. In the photos, it’s as if McQueen were saying, “I don’t have to work to get these acting parts or awards or million-dollar fees, or these race cars, or even these beautiful women, they just come to me without effort.”
But what is being lost in the iconography of Steven McQueen is how badly he wanted certain things, none more so than a film career in the late 1950s. There wasn’t much of anything he wouldn’t do to get it. The Magnificent Seven, released in 1960, is the story of McQueen’s reality. The King of Cool did more than break a sweat to get cast in and film this movie–he had a series of meltdowns.


To read the whole story, go here.
Posted by Nancy Bilyeau at 5:55 PM