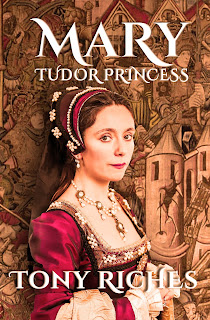 I've been impressed with the fiction of Tony Riches for quite some time. Tony writes about the early Tudors, bringing to life the exciting dramas of Owen Tudor and his sons, Edmund and Jasper Tudor. Without these men, there'd have been no dynasty at all!

The novel I just read is Mary, Tudor Princess. It's a book about the sister of Henry VIII. I liked it so much I asked Tony for an interview!


NB: I found your depiction of Mary Tudor very fresh. She seemed younger and more naive in this story than in other depictions. Did you have a strong idea of her character before you began or did it evolve as you wrote?

TR: My first encounter with Mary was her birth in book three of my Tudor trilogy. She was close to her mother and shared many of her mother’s qualities, and of course her paternal grandmother, Lady Margaret Beaufort. When I finished the trilogy, I had a wealth of information about Mary Tudor – and decided her amazing story would make the perfect ‘sequel’.


What were your main sources of information on Mary?

One of the most useful sources was Erin Sadlack’s book ‘The French Queen’s Letters: Mary Tudor Brandon and the Politics of Marriage in Sixteenth-Century Europe (Queenship and Power)’. As well as translations of all Mary’s surviving letters, this has invaluable analysis of the context. I also discovered a wonderful biography, ‘Mary Tudor the White Queen’, by Walter Richardson. This is full of fascinating details which I could research further to bring her world to life. The most intriguing research was my visit to her home at Westhorpe and to see Mary’s tomb in Bury St Edmunds (where I also saw a lock of her hair).


What surprised you the most in your research of her?

I think it was her stoical acceptance of her brother Henry’s insistence that she should marry the aging King of France. It seems she accepted his wishes as her duty – and tried to make the best of it. Mary insisted on being referred to as ‘Queen of France’ for the rest of her life.


Your depiction of Catherine of Aragon came alive in this novel. Young Catherine is so different than the woman we meet in the many Anne Boleyn novels. How did you develop this view of her?

As with Mary, I’ve ‘lived’ with Queen Catherine for the last few years, as she first appears as a fifteen-year-old in my Tudor trilogy. I recommend Giles Tremlett’s biography, ‘Catherine of Aragon, Henry’s Spanish Queen’ to anyone who would like to see beyond the more traditional treatment of Catherine. The developing friendship between Catherine and Mary was interesting to write. 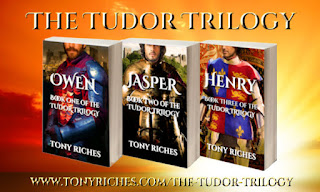 What led you to this series, and specifically to Owen Tudor?


I was born in Pembroke, Wales, birthplace of Henry Tudor, and began researching his life – as like most people I barely recalled a mention of him in school history lessons, as the focus was always on Henry VIII and his wives. I eventually had so much material I realised I could write his story as a trilogy, with Henry being born in book one, ‘coming of age’ in book two and becoming King of England in book three. At the time I wrote Owen there were no books about his life, so I wanted people to appreciate how he founded the Tudor dynasty.

Does living in Wales give you a special viewpoint on the early Tudors?

Yes. Pembroke Castle is well preserved and only a few miles from where I live, as is Edmund Tudor’s tomb at St David’s Cathedral. Henry and Jasper escaped to exile from the nearby coastal town of Tenby, so it was easy for me to ‘follow in their footsteps’ all the way to the remote chateaus in Brittany which feature in my books. Last year a group of us raised the funding for a bronze statue of Henry Tudor to be placed in front of Pembroke Castle, so now no one can forget the Tudor connections to the town.

I must confess I find the romanticism of Charles Brandon in many mediums trying. I think a lot of it has to do with Henry Cavill playing him in The Tudors. How did you approach such a famous figure from Henry VIII's court?


I researched Charles Brandon for my book on Mary, and realised there was much more to him than is generally known. This inspired me to write my latest book, ‘Brandon – Tudor Knight’ which follows him from his early days with Anne Browne and the young Henry, through his life with Mary, and on to his final marriage to his young ward, Catherine Willoughby. Brandon was no saint - but I’ve tried to show why he acted as he did. I also kept his story as factually accurate as possible and hope this new book will help readers understand him.

Do you think that in the end Mary made the right choice in Brandon?

Mary’s life would have been so different if King Louis XII of France had lived even a few more years, as I don’t think Brandon would have been able to wait for her. The problem she had was that Louis’ successor, King Francis, would have happily married his widowed stepmother off to whoever he wanted a favour from. I believe Mary married for love, despite the risks – and that Brandon loved her in his own way for the rest of her life.

Tony Riches is a full-time UK author of best-selling historical fiction. He lives in Pembrokeshire, West Wales and is a specialist in the history of the Wars of the Roses and the lives of the early Tudors. Tony was a finalist in the 2017 Amazon Storyteller Awards and is listed 130th in the 2018 Top 200 list of the Most Influential Authors. For more information about Tony’s books please visit his website tonyriches.com and his popular blog, The Writing Desk and find him on Facebook and Twitter @tonyriches.
Posted by Nancy Bilyeau at 1:00 PM