The Unbearable Beauty of a Sevres Porcelain Ship

My novel The Blue sends the main character, Huguenot artist Genevieve Planche, into the heart of the porcelain business that thrived in Enlightenment Europe. It is a spy story, a love story--and also a story of art.

This is not about making plates and cups and other dishes, although in the 18th century wealthy people did use their porcelain at the table.

The celebrated Sevres pieces of the 1750s are ravishing. They are works of beauty, but so elaborate and decorated that it's like eating too much rich candy. You feel as if you could get a stomach ache looking at Sevres porcelain. And you'd still enjoy it.

The preeminent porcelain factory, or workshop, of the time was that of Sevres, near Versailles in France. It was the patronage of Madame de Pompadour, the elegant and cultured mistress of Louis XV, that powered Sevres. Without her, Sevres could not have survived. Fortunately for the many highly trained artists, sculptors, chemists and decorators employed there, Pompadour was obsessed with the factory.

It is difficult to even grasp the difficulty and expense of creating an intricate piece of Sevres soft-paste porcelain in the 1750s, when my novel takes place. Jean Hellot, the chief chemist, said the goal was to produce porcelain of such translucence it was like "squeezed snow." Then came the painters and the gilders.

I offer you as an example one type of porcelain Sevres produced: Pot pourri à vaisseau, or the pot pourri holder as a ship. These were produced from 1757 to the early 1760s. Frivolous to an extreme, they were exquisite--and decadent. While war raged and some French people were starving to death, enormous effort was put into these ultra-luxury objects. Supposedly they held the pot pourri people used in order to scent a room. 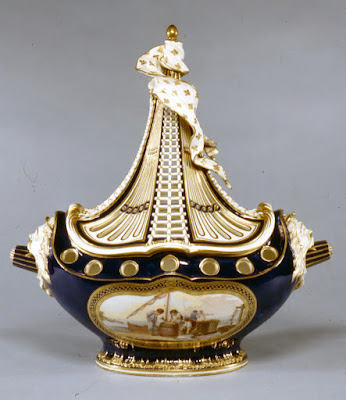 They were some of the largest pieces produced by the factory, and quite difficult to fire. They tended to collapse in the kiln. Only ten survive today. The one shown in the photo above is part of the collection of the Walters Art Museum in Baltimore, one of only four "ships" in the United States.

Resting on a gilded wooden base, it takes the form of a stylized boat, complete with rigging, port-holes and a flag. The lower part is decorated with a scene of sailors packing fish on the front, and a marine themed trophy on the back, painted by Jean-Louis Morin.

The scene of sailors preparing a boat, painted during this period, could only have been inspired by the Seven Years War, in which France and Austria battled England and Prussia. What was at stake was supremacy in Europe and the colonies spread across the world--would it be France or England? Historians say that Madame de Pompadour supported this war, and pushed her royal lover to declare it. But it was a loss for France, a turning point, and she was ultimately blamed.

The design of the vase is attributed to Jean-Claude Duplessis père. He was a a goldsmith, sculptor and ceramics modeller, bronze-founder and decorative designer who worked in the Rococo style. He invented these boats, which were cherished by Madame de Pompadour.

A number of boats survived the French Revolution, as did the factory itself. The Revolutionaries did not burn down Sevres but respected its talent. A little later, Napoleon and Josephine took pride in Sevres porcelain, as did Eugenie, the wife of Napoleon III.

At the turn of the century, a wealthy Baltimore railroad magnate and collector named Henry Walters took a fancy to the ship, purchased it, and bequeathed it to the city in 1932.

Across the centuries, the porcelain ship still exerted a fascination for the wealthy. Some things just don't change. :) 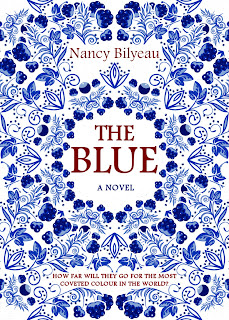