My son and I both love to explore New York City, always eager to discover new places, and though shopping and Christmas dinner prepping beckoned (actually screamed my name), we nonetheless made a Christmas Eve plan to travel from our apartment in Forest Hills to the New York Botanical Gardens in the Bronx for an afternoon outing.

Now we did spend time there together once before, with a group of kids when Alex was nine years old, but memories are hazy. The famous Holiday Train Show was on display then and now, and while we were both enthusiastic about it, I wanted to see some of the other garden sights more. A train show promised to inflict long lines, and I wanted to soak in some serenity instead.

Serenity is very much what you experience there. The Botanical Gardens sprawls across an enormous parcel of land in the Bronx: 250 acres. It was established in 1891. That should have been a clue right there--that I'd find the day especially meaningful since that year arrived smack in the middle of the Gilded Age. :)

Once inside the gate, we jumped on the tram that rumbles across the acreage and enjoyed the sights. We got off once to check out the waterfalls. And we weren't disappointed!

But it was at the Holiday Train Show, which Alex wanted to see as long as we were there, that I found myself not just excited but also enthralled.

For my historical novels set in the 1910s, Dreamland and The Ghost of Madison Avenue, I've been diving deep into research of life in New York City just after the turn of the century. The Gilded Age was on the wane, but its extravagant, exquisite buildings continued to dominate. Some of them still rise across the city, while others have been demolished or radically transformed.

But here, at the Holiday Train Show, they exist in miniature, with trains zipping everywhere! There were 19th-century and turn-of-the-century iconic buildings rising among the tracks. I was in heaven.

For this post, I have selected four to show them first as miniatures at the train show, and then in photographs of their time. Each of these buildings has a fascinating story to tell...

1.) William K Vanderbilt House. Built at 660 Fifth Avenue, construction completed 1882. Sold to a real estate developer in 1926 who demolished it. The building was dubbed "the Petite Chateau." Vanderbilt married Alva Belmont, who was determined to make her mark on society and this house was her vision. She arranged their daughter Consuelo's marriage to the 9th Duke of Marlborough.


2.) Pennsylvania Station. Opened to the public in 1910, it was designed by architects McKim, Mead & White, who followed the fashionable Beaux-Arts style but were also inspired by the Baths of Caracella in Rome. Demolished in 1963, it was replaced by another train station considered an architectural horror. 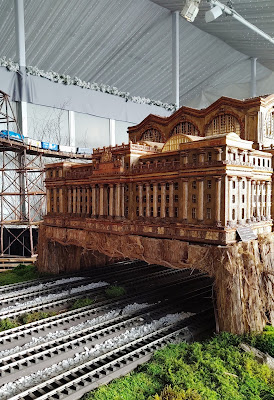 
4.) Josephine Schmid House, 807 Fifth Avenue, built 1897. The widow of a millionaire beer brewer, Josephine built the house to make her mark on society. It didn't quite work. In 1912, the Knickerbocker Club bought it, and knocked it down.

Not all of New York's iconic buildings from that era have bit the dust, thankfully. I'll now share some miniatures from the New York Train Show that are very much with us!


I'll think you agree with me, it was quite a day. And the lines at the train show weren't even that long. :)


Nancy Bilyeau is a magazine editor and author of historical novels who lives with her family in New York City.
Posted by Nancy Bilyeau at 10:19 AM