I told a friend recently that I don't find enough time to read historical fiction, my favorite genre. The reason: I have a fulltime job, kids, and my own books to write. But after making this declaration, I took another look at my Kindle list and at the books stacked by my bed. And you know what? That statement is not in every respect accurate, as Ong Chi Seng said in one of my favorite films, Bette Davis's The Letter.

I've actually read quite a few historical novels in 2021! Now not all of them were published in this calendar year. But that's OK. People don't confine their reading to the year of publication.

First, I want to shine the light on these amazing authors. Some are big bestsellers, and some are with small publishers and frankly need more attention paid.

The second reason is I realize that I walk a particular line in my reading. I like classic historical novels of queens and kings and soldiers and spies. But I also like murder mysteries and thrillers set in the past.

The third reason is I realize after examining my 2021 list that I read books set in "popular" eras: World War II and the Tudor era. But I enjoy stories in many, many other periods too, from 11th century England to 20th century Mexico and India.

So without further ado, here is my list of fiction set in the past that I read in 2021... 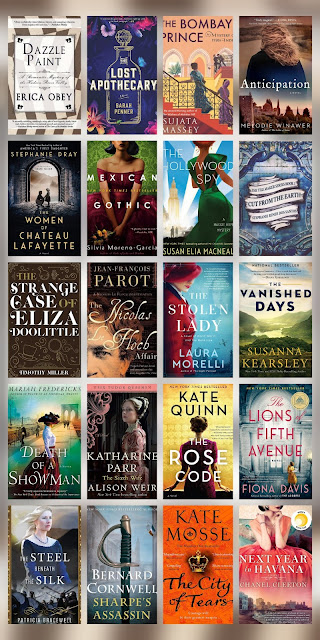 Dazzlepaint, by Erica Obey. A layered murder mystery set in Woodstock in 1919 that draws on some deliciously eerie legends of the Catskills.

The Lost Apothecary, by Sarah Penner. This page turner kept me up past 2 a.m. because I had to know what was going to happen to the characters in both 1791 London and the modern day city.

The Bombay Prince, by Sujata Massey. The third book in one of my favorite historical mystery series being written today. Bombay solicitor (and Zorastrian) Perveen Mistry is a fantastic protagonist!

Anticipation, by Melodie Winawer. I love it when science enters the story, and this thriller weaves medical mysteries and mystical possibilities into the rich history of Greece.

The Women of Chateau Lafayette, by Stephanie Dray. You just have to stand back and applaud the skill of a novel running on different time tracks that manages to pull you into characters' lives like this.

Mexican Gothic, by Silvia Moreno-Garcia. I know I'm a little late to the party here, but I was blown away by the atmosphere and dark tension in this imaginative novel.

The Hollywood Spy, by Susan Elia MacNeal. I don't miss a Maggie Hope mystery. And this installment took Maggie to one of my favorite settings of fiction and film: 1940s Los Angeles. Superb pacing.

Cut From the Earth, by Stephanie Renee Dos Santos. This novel really gets at the drive to create art--and what it could cost someone in past centuries. I loved the "trip" to 18th century Lisbon.

The Strange Case of Eliza Doolittle, by Timothy Miller. A delightful reimagining of a Sherlock Holmes adventure, this is the first in a new series. Lots of surprises here!

The Nicholas le Floch Affair by Jean-François Parot. Yes, it was written in 2009. But I've just discovered this translated series set in pre-Revolutionary France thanks to the fantastic (and sexy) TV series running on MHz.

The Stolen Lady: A Novel of World War II and the Mona Lisa, by Laura Morelli. If somehow you didn't realize that art could be at the heart of page-turning mystery and emotional turmoil, then drop everything and start reading.

The Vanished Days, by Susanna Kearsley. I'm a longtime fan of this author, who always manages to marry haunting stories of love and loss to magnificent history. Here it's Scotland in the late 17th and 18th centuries.

Katharine Parr, the Sixth Wife, by Alison Weir. One of my favorite historians writing a novel about my favorite wife of Henry VIII? Irresistible. Weir's series found fresh angles to The Six.

The Rose Code, by Kate Quinn. When I hear the words "Bletchley Park," I come running. But it turns into a sprint when the book is by Quinn, who pens such stirring and beautifully researched historical stories.

The Lions of Fifth Avenue, by Fiona Davis. How could I not devour a novel set in one of my favorite buildings in all New York City--the New York Public Library? I loved the strong female protagonist.

The Steel Beneath the Silk, by Patricia Bracewell. Any fan of The Vikings or The Lost Kingdom needs to read this amazing series about the 11th century's Emma of Normandy.

Sharpe's Assassin, by Bernard Cornwell. Paris right after the Battle of Waterloo yields a fantastic setting for espionage and adventure. I interviewed Cornwell  for BookTrib on his writing career.

The City of Tears by Kate Mosse. An author who has deeply inspired me with her blend of suspense, historical atmosphere and richly drawn characters. And here she's writing about the Huguenots!

Next Year in Havana, by Chanel Cleeton. I was late to discovering this 2018 novel, but wow, this author knows how to write compelling characters and ripped-from-the-pages history. (And romance.)

I fear I may have left someone out from my reading list of the year and for that I fervently apologize!!

Head's Up: There are so, so many historical novels and mysteries coming out in 2022. I'm already looking forward to Garden of Sins by Laura Joh Rowland, The Strange Case of the Dutch Painter by Timothy Miller, The Next Ship Home by Heather Webb, And By Fire by Evie Hawtrey, The Prophet's Wife: A Novel of an American Faith by Libby Grant, and Unnatural Creatures by Kris Waldherr.