The Tomb of a 17th Century Wife

No doubt due to my morbid nature, tombs and effigies have long fascinated me, the older the better. I find myself in a friendly competition of sorts to find the most unusual ones with my friend Beth von Staats, a fellow historical writer, who brought to my attention the singular tomb statue of Richard Rich, despicable courtier to Henry VIII. Rich is lying on his side, propped up, staring at the living while holding a book in the most unnerving way.

So imagine my delight in coming upon an image of a woman wearing Elizabethan dress and not just lying on her side, propped up to face us, but cradling a skull! The statue is to be found in the Lady Chapel of Exeter Cathedral. 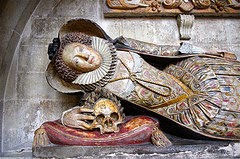 I dove into research on the woman in question, Lady Dorothy Dodderidge. There was little to learn. She was the daughter of Sir Amias Bampfield, a member of Parliament in Devon and the second wife of John Dodderidge, a justice of the king's bench considered incorruptible. He earned the nickname "the sleeping judge" because of his habit of closing his eyes while listening to a case. The couple had no children. She died in 1617, well into the reign of James I.


I did discover that Dorothy possessed an interesting first husband who preceded the esteemed Dodderidge: Sir Edward Hancock, devoted secretary to Walter Ralegh, entrusted with carrying his seal. Hancock traveled to Guyana with Ralegh in 1595--the courtier was attempting to win back the favor of Queen Elizabeth I by discovering gold for England (mostly for himself). None was found of course, but a book did come from it: The Discovery of Guiana.


After Ralegh was arrested in 1603, the 43-year-old Edward Hancock committed suicide in what may have been a failed suicide pact with Ralegh, who tried to stab himself to death with a table knife in the Tower.

I asked Mathew Lyons, author of a wonderful book on Ralegh called The Favourite, what he thought about the possible pact. "Not an explicit one for sure," he responded. "I tend to be a bit cynical about Raleigh's attempted suicide.  It smacks of opportunism. It would be pretty cruel to make someone kill themselves to make your own fake suicide look more realistic."

But, Mathew says, another Ralegh associate in Guiana, Lawrence Keymis, also killed himself. Did Ralegh have a dark charisma? "Yes, that would be my reading of it," says Mathew. (His twitter handle is @MathewJLyons, follow him!)

Sir Edward Hancock's estate was given to his widow to administer. Shortly after, Dorothy married the sleeping judge, who was older than 50 at the time. Nonetheless, he outlived her by 11 years, even marrying a third time, but choosing to be entombed with Dorothy in a niche under a Gothic arch. His monument consists of his recumbent effigy--he's not propped up on his side-- sculpted in alabaster, resting on a chest-tomb. He's wearing scarlet robes with a court roll in his hand.


We can't know what Judge Dodderidge had in mind when he ordered the designs for The Lady Chapel. Dorothy is cradling a memento mori, which in Latin means: Remember that you must die.


It might have been the fashion of the time, for there exists a famous portrait of 1615 by Frans Hals, called Portrait of a Man Holding a Skull.In researching memento mori, I came across this observation: "Well known literary meditations on death in English prose were part of a Jacobean cult of melancholia that marked the end of the Elizabethan era." That surprised me. I'd read in other places that many in England welcomed the ascension of James I, exhausted by the 45-year-long rule of the Virgin Queen. It was more complex, clearly.

And here's his statue: 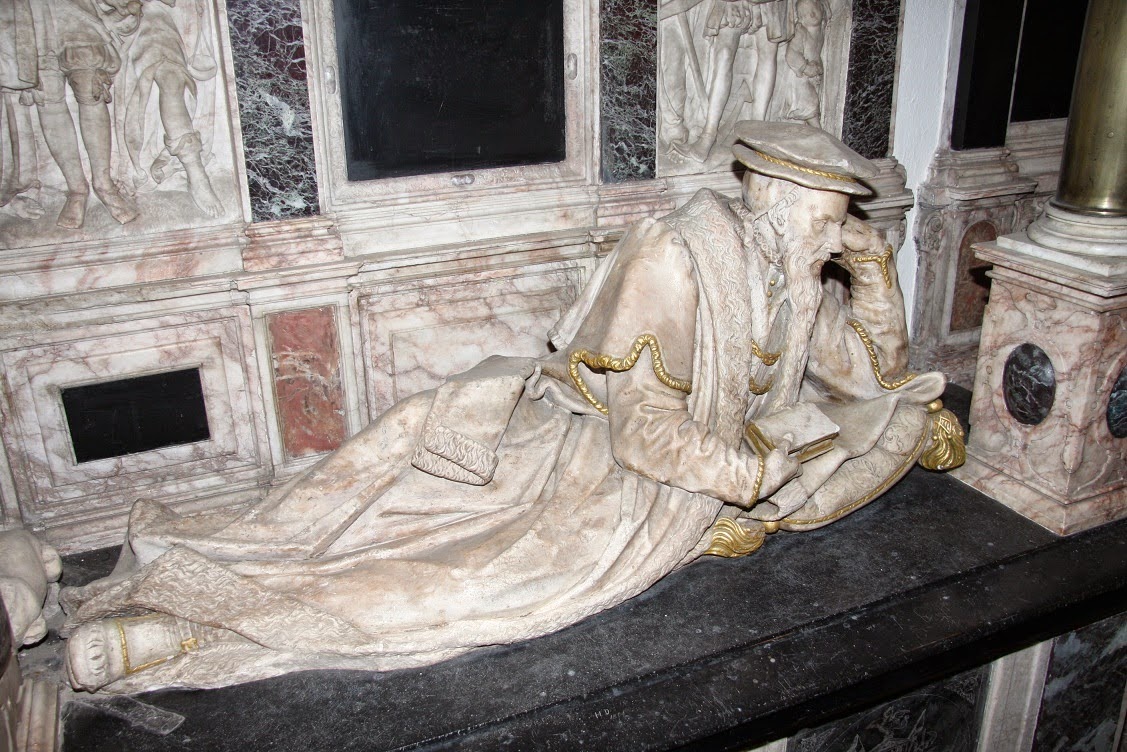 Nancy Bilyeau is the author of a historical mystery trilogy published by Simon & Schuster: The Crown, The Chalice and The Tapestry. The series is available in North America, the United Kingdom and Germany.

Posted by Nancy Bilyeau at 1:54 PM