William Harrison Ainsworth and the "Romancing" of the Tower of London


On a December night in 1840, a sizable group of writers, editors, publishers, printers and illustrators gathered at the Sussex Hotel, in the fashionable town of Royal Tunbridge Wells, for a dinner party. It is possible that Charles Dickens, the young author of Oliver Twist and The Life and Adventures of Nicholas Nickleby,  was invited to the party. Most definitely in attendance was George Cruikshank, the talented illustrator of Oliver Twist.

The host of this lavish affair was the famed 35-year-old novelist William Harrison Ainsworth. The occasion: the successful serialization over the last year of his fifth novel, The Tower of London: A Historical Romance, which told the story of the tragic Lady Jane Grey, beginning with her arrival by barge at the Tower to launch her nine-day-reign and ending with her decapitation on Tower Green on July 10, 1553.

The novelist was sure to have cut quite the dash at his own party: He was tall, slim and dark, with a fondness for stylish clothes that earned him the description dandy. From the Oxford Dictionary of National Biography: "Lady Blessington, whose salon he attended, said he and Count D'Orsay were the two handsomest men in London."

In a passage accepted as autobiographical, a character in one of Ainsworth's novels says, "Some people told me I was handsome, and my tailor (excellent authority, it must be admitted) extolled the symmetry of my figure, and urged me to go into the Life Guards."

Ainsworth was at perhaps the zenith of his career in 1840. He was a friendly rival to Dickens; in fact, his 1839 novel Jack Shepard outsold Oliver Twist in early editions, and Ainsworth had recently replaced Dickens as editor of Bentley's Miscellany, the predominant fiction magazine.

The rivalry with Dickens would not last; nor would the friendship. Dickens would become a colossus as Ainsworth slowly sank into oblivion. His 39 historical novels, all of them romances and adventures, were astoundingly popular with the reading public of Victorian England, but not with the critics. Although Ainsworth was himself a genial and generous man, he was often on the receiving end of literary volleys almost hysterical in their dislike. When his books no longer sold as well, he had no circle of supporters to buoy him. Quite the opposite. One writer said of him in 1870: "Let us start with an opinion fearlessly expressed as it is earnestly felt, that the existence of this writer is an event to be deplored." Ainsworth was still alive when this sentiment was published, and in reduced circumstances.

That dazzling night at Royal Tunbridge Wells,  Ainsworth, mercifully, could not know that his books would go out of print, that fellow writers such as Edgar Allan Poe would describe his prose as "turgid pretension."

Yet he is not without a legacy. The book celebrated that night, The Tower of London: A Historical Romance, triggered a new kind of interest in William the Conqueror's castle keep. It was an interest that deepened through the Victorian age, and is part of the reason visitors pour into the Tower, to the tune of  2 million a year. 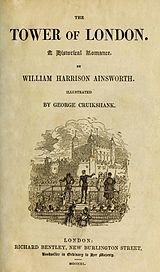 Ainsworth was born on February 4, 1805, in Manchester, as the city became the center of the industrial movement. Thomas Ainsworth was a prominent lawyer and pressured his oldest son to follow him in that profession, which he did for a time, but without much enthusiasm. There was a younger son, Thomas Gilbert Ainsworth, who at university suffered a "brain fever" and was incapicitated by mental illness his entire life.

Two years after the father died, Ainsworth, newly married, published his first novel, the romance Sir John Chiverton. It brought him to the attention of Walter Scott, who befriended Ainsworth but privately referred to him as an "imitator." His next two books, the historical novels Rockwood and Jack Schepard, both featuring famous outlaws, were tremendous successes. Yet some criticized the romanticizing of criminals, a complaint Dickens was also hearing with Oliver Twist.

It was time to try something different.

When Ainsworth, along with his illustrator, George Cruikshank, researched the Tower of London, it was far from the smoothly operating tourism operation of today. It had been two centuries since the last monarch, Charles II, resided there. Dickens wrote: "Once a fortress, a royal residence, a court of justice and a prison, {the Tower} is now a government storehouse and armory." An outbreak of disease caused by poor water supply (and blamed on the filthy moat) killed three men of the garrison.


"Every one must be struck with the incivility and want of accommodation therein. Upon entering the gates this afternoon I found some hundreds of persons, male and female, huddled together, striving to obtain tickets from a window under a portico where no two persons can pass abreast, and the scene there reminded me of what might be expected at the gallery entrance of a theatre on boxing night. After waiting just one hour we obtained our tickets and were ordered into what is called the ante or refreshment room. This room is about 12ft. by 18ft., with a counter containing ginger pop, buns, &c., immediately behind which are two waterclosets (I understand recently erected). I will not attempt to describe the stench one had to contend with, the place being completely crammed with persons waiting their turns or numbers to be called, but merely add that this room seems to be the resort of pickpockets, two ladies having been eased of their purses, containing some pounds, during the half hour I was present therein."

Ainsworth opened the door to a more illustrious period in the Tower's history. It's true that the novel's prose is melodramatic ("heaving bosoms," "piercing black eyes" and "sinister smiles") and the pages are crowded with Gothic characters (not one or two but three supporting characters who are giants--and a dwarf!) along with august personages of the past. But Ainsworth's diligent research brings to life the grounds, the kitchens, the passageways, the prison cells and the beautiful chapels of the Tower. He made full, imaginative use of the Tower of London, as a setting for a story of high drama.  And Cruikshank's 40 engravings and 58 woodcuts play their suggestive part.

And in the center of it all is Lady Jane Grey, a character of undeniable pathos, surrounded by conspiracies. Ainsworth invests the Spanish ambassador, Simon Renard, with the malevolent abilities of a Blofeld straight from Bond. Northumberland is formidable indeed.There is an energy to the book, and an eerie, even frightening atmosphere. The rack, the Scavenger's Daughter and the infamous Little Ease are all present and accounted for.


The current official Historical Royal Palaces Tower of London "fact sheet" on torture emphasizes how little actual torture has taken place within its walls: "Myth-making reached its peak in the 19th century, spurred on by novelists who wished to evoke the Tower of London in its former days as an ancient fortress and stronghold e.g. Ainsworth’s The Tower of London." Ainsworth may have put the devices of torture to Gothic uses, but they were very much present in the 16th century. Ironically, government-approved torture of prisoners ebbed during the reigns of Edward VI, Jane Grey, and Mary, only to rise to highest levels during reign of Elizabeth.


After The Tower of London, Ainsworth's career went on for more than thirty years. The characters in his books were not dimensional; bosoms continued to heave and black eyes to snap. R.H. Horne, Dickens' friend and collaborator, described Ainsworth as "a reviver of old clothes" whose novels are "generally dull except when revolting." Punch satirized Ainsworth as an aging Tudoresque dandy with the caption "The Greatest Axe-and-Neck Romancer of Our Time." 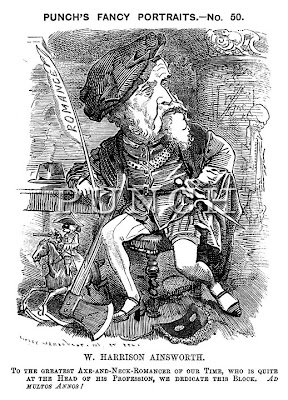 By the time of the Punch jab, Ainsworth, a widower, was responsible for his mentally ill brother. He had accepted a government pension because...he needed it. A year after a dinner in his honor in Manchester, arguably the only place where he was still esteemed, William Harrison Ainsworth died at the age of 77.

But the Tower felt the lingering impact of Ainsworth. In the foreword of his book, he had called for the opening to the public of Beauchamp Tower, the place of imprisonment of the Lady Jane Grey, where she is thought to have written on the wall of her cell. The cause was taken up by powerful patrons, including Prince Albert. Beauchamp was restored by architects and made available to visitors; other buildings were opened too.

Ainsworth's influence, as explained in The Tower of London: The Official Illustrated History:


"In The Tower of London: A Historical Romance, the Tower was first and foremost the setting for an endless series of heart-rending events and foul play. The author tells of dungeons though in fact the Tower has very few basement rooms and of a time when Tower Hill boasted a scaffold and "its soil was dyed with the richest and best blood in the land.” Such fantasies, backed by the relentless march of the romantic movement, helped create and fuel an ever-increasing demand to see and experience such events.”

No matter how much the novel's violence veers into fantasy, the faintly menacing image of the Tower that draws the throngs of the curious today was created in part by William Harrison Ainsworth. He was the greatest neck-and-axe romancer of his time...and perhaps of ours too.

Posted by Nancy Bilyeau at 6:34 AM