My Family & the Legend of the O'Neills 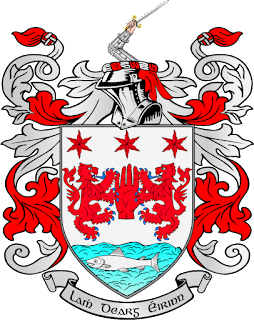 When I was nine years old, I was pulled from class on St. Patrick's Day as the student who looked the most Irish at Daniel Webster Elementary School in Livonia, Michigan, and paraded around during a brief celebration. It wasn't just the green shirt my mother handed me for the day, it's my appearance: red hair, pale freckled complexion, and bluish-green eyes.

Now, I'm only part Irish. I'm also French, English, German, and Dutch. A typical American mix. The Irish descent comes through my grandfather, Francis Aloysius O'Neill. His grandfather immigrated from Ireland in the mid-19th century, settling in Indiana. My grandfather was an accountant who became a businessman in Chicago, the city of my birth.

I learned about the Bloody Hand of O'Neill from my Uncle Frank, who followed my grandfather into business. Uncle Frank always took a lively interest in family history.  He told me that our family "crest" was a severed bloody hand in honor of a centuries' old legend. An ancient O'Neill king cut off his own hand. It was during a boat race--the winner would be given an island, and he hacked it off and threw it so he could be the first to "touch" a coveted island and thus win it for his clan.

Having a pragmatic mind (on occasion), I got stuck on the proposition that someone cut off his hand mid-race and then, amid the shock, pain and blood loss, threw it a long distance. Even if it were possible, who would want to? We in the extended family of O'Neills can, it's true, perform acts not entirely in our best interest. Hand-severing mid-race is rather extreme. 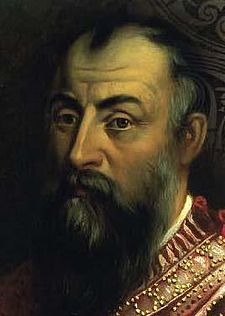 I've long been proud of the achievements of Hugh O'Neill, earl of Tyrone, who gave Queen Elizabeth I such a hard time. He was a military strategist and skilled politician. If anyone's hand was to be hacked, it wouldn't be his.

Imagine my surprise when, several years ago, I did some idle Googling and found a wealth of family crests featuring a bloody hand.

A bit more poking about revealed re-tellings of the ancient king's self-severing. The stories vary dramatically. The O'Neill was actually an Irish mercenary on a Viking longboat closing in in Ulster and scooped the prize for himself through his hand toss. Or was he an even older clan leader who claimed the entire island of Ireland? A favorite theory: The hero in question was Niall of the Nine Hostages (a name that sounds like a joint brainstorming session between George R.R. Martin and Charlaine Harris), who lived in the Fifth Century.

According to the University of Notre Dame's O'Neill Hall:

"The furious race narrowed to two boaters and Niall, seeing his rival edging ahead, made a decision. He pulled out his battle axe, severed his left hand, and with his right hand threw it to shore, claiming the land for his descendants forever. The name O'Neill derives from 'uá Niáll.' "

The O'Neill hand is actually the subject of an entire book published in 2007, Derek Lundy's The Bloody Red Hand: A Journey Through Truth, Myth and Terror in Northern Ireland. Its appearance holds a far greater importance than a symbol for one family. "The severed red hand still seems to be the perfect symbol for the province of Northern Ireland known officially as Northern Ireland," Lundy writes. 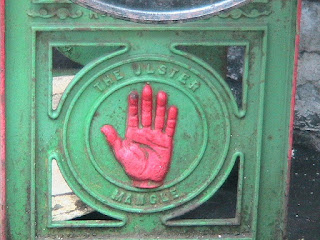 I found some articles published in recent years calling for a "reassessment of the ancient symbol." In other words, time to get rid of the hand.

Which I certainly understand. But at the same time ...  it's a shame.