My Interview With Rhys Bowen

As the editor of The Big Thrill, I get books in the mail literally every day. Yes, even Sunday!

Last year, I was struck by the cover of one novel (an ARC in publishing lingo, standing for "advance review copy") and the author's name.

I was intrigued. This didn't seem to be a book in one of Rhys's series of historical mysteries. (I'm an admirer of both series.) A glance at the press materials revealed that this was a "standalone," in the lingo of publishing, and a big epic World War II thriller.

Even though I had work up to my ears and was in the middle of two other books, I turned to the first page of In Farleigh Field, and was immediately captivated. I plunged into her suspenseful story of a family in 1941 England and how they become caught up in a widening conspiracy after a soldier is found on the family estate, dead in his parachute and with false papers. My favorite character was the young man living near the estate, the vicar's son, who is in love with one of the daughters but must investigate the possible treasonous conspiracy as a secret intelligence officer.

After finishing, I contacted Rhys's publicist and arranged an interview. We spoke for an hour on the phone and she was full of interesting stories and perspectives on England during World War II, women as spies, and how she wrote the book she wanted to write. Very inspiring.

And she was quite funny. I love the pictures she sent to accompany the interview, including one of her and a cutout of the Queen: 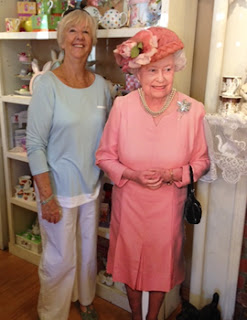 And check out In Farleigh Field!
Posted by Nancy Bilyeau at 12:33 PM