I was delighted to see two photos of my books, on sale at independent bookstores. I love the thought of readers browsing the tables and discovering my work! I've haunted bookstores since I was a grade-schooler and have found countless treasured novels that way.

Yesterday, my friend Diane Wilshere, whom I've known online since we were part of the same yahoo discussion group on Tudor England, sent me a photo that made me cry "Yippee!": My novel The Chalice is on sale as a "staff pick" at Powell's Books, in Portland. Powell's is one of the most influential bookstores in the U.S., a chain of stores actually, often called a "city of books." 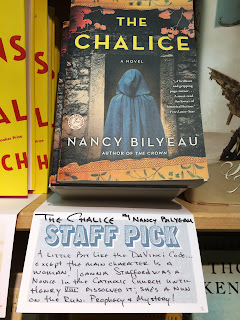 The "Staff Pick" note says, "A little bit like The DaVinci Code...except the main character is a woman! Joanna Stafford was a novice in the Catholic Church until Henry VIII dissolved it; she's a nun on the run. Prophecy & Mystery!"

Last week, I received a wonderful email from some in a city closer to home. Melodie R. Winawer, author of the upcoming historical thriller The Scribe of Siena, spotted The Tapestry on the table of a bookstore in Saratoga, New York. 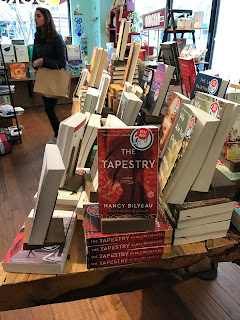 Thank you, friends, for sending me these snapshots from the front, and thank you, bookstores, for supporting my novels and bringing readers to the world of Joanna Stafford.